Return of the Xavier Christmas pageant 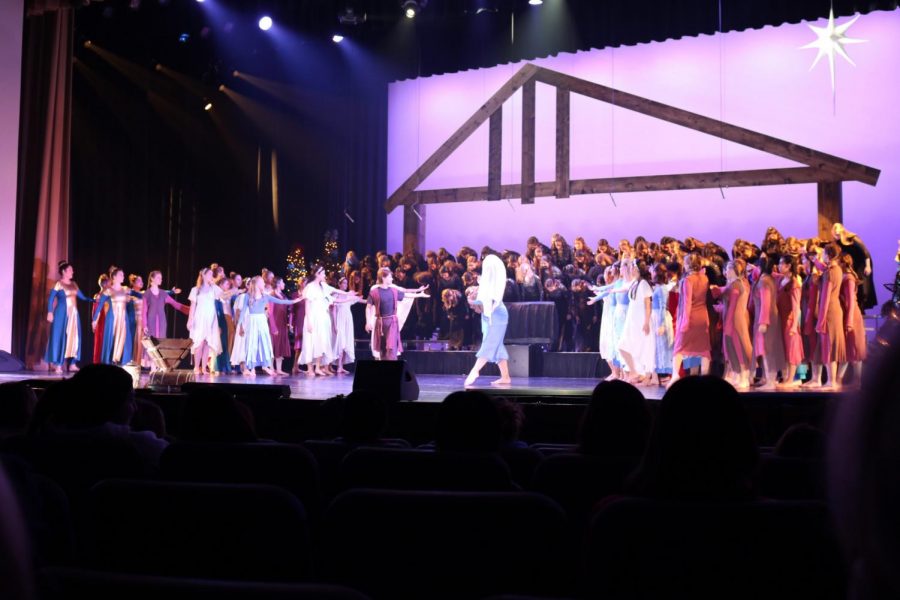 After weeks of preparation by students and staff, Xavier held its Christmas pageant as a gift to the community. Since the 2020 pageant had to be performed virtually, students and staff were eager to witness a live performance after two years.

The phrase “true meaning of Christmas” was heard all around campus when describing what the pageant encompasses. This performance served as a way to bring the Xavier community together and show the wonderful holiday spirit through the reenactment of the birth of Jesus Christ.

Teachers in charge of the pageant this year were Maryanne Herding, Teresa Corderman and Brittanie Hockins. Together they decided on “Joy to the World” as the title of this year’s show. Hockins said they chose this name because they “wanted something joyful after a year of challenge.”

The first Christmas pageant at Xavier was in 2003. While the story has remained the same, a few changes have been made along the way. At one point there were live speakers, and one year they even had a singing Mary rather than the typical dancer.

Other measures, to keep the show slightly different, are taken every year, which makes for an exciting new performance. Songs sung by the choir and the set designs change a little bit each year. This year there was a brophy student playing the role of Joseph, which has only been done one other time.

The 2021 show had 48 dancers from both the performance and advanced classes. Herding, who is the dance department chair, described this year’s dancers as “grateful and smart” and it “seems they are much more appreciative of each other and the ability to be performing again.”

Kate Blair, a senior and 2nd year member of Xavier’s Performance Dance Company, was asked by Herding to play the role of the angel Gabriel. Blair describes this experience as an “honor,” and she hopes that “it reminded our community of the joy of the Christmas season after hours of practice and preparation.”

The other fine art that was showcased was the singing by Xavier’s freshman and honor choir. With the help of choir director Brittanie Hockins, the girls performed all of the music live.  There were a total of 90 girls singing, and the soloists were Maddy Kunis and Aubrie Silva.

Four-year choir member Ellie Higgins said, “I think the hard work and dedication to every song made the whole pageant run smoothly.” She also noted that, unlike past years, she “managed to remain unscathed and not faint!”

For freshmen, sophomores and new faculty, this was their first time seeing a Xavier Christmas pageant in person. Xavier students and teachers gathered in the Performing Arts Center during fifth period to watch the show.

Unsure of what to expect, freshman Ally Brown had been “excited to finally see what Xavier dance and choir works toward.” Brown also took note of the “beautiful lights and decorations.”

The Xavier College Prep Christmas Pageant was performed on December 3 for the school and on the 5th for the community. This was one of the largest audience turnouts this performance has received in years.