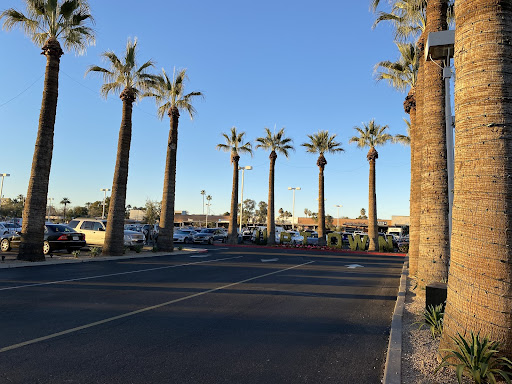 Many Xavier students, particularly freshmen, walk to Uptown Plaza on Camelback Road and Central Avenue to get food, shop and enjoy the company of their friends. While some students relaxed at Uptown Plaza during the middle of the week, most have gone on Fridays after early release from school.

Many of Xavier’s current high school students have fun outside of school by simply hanging out with friends or participating in common activities such as walking to Uptown Plaza to grab a bite to eat on Fridays after early release from school.

Junior Perla Akiki ‘23, for example, says that she likes to spend her free time “hanging out with friends, going to Uptown Plaza, shopping, watching movies and visiting friends at their work.”

Walking to Uptown, also referred to as “AJ’s,” is an activity that was also familiar for Xavier’s Photography teacher Julianne Averbuck ’07 who attended Xavier from 2003 to 2007.

“From freshman to senior year it all looked different, but I did what most kids are still doing now for fun. It just looked a little different, like some of the Uptown shops were different,” said Averbuck.

Outside of school, Averbuck would also partake in common activities such as Brophy-Xavier social events, watching bands, going to the mall, going on hikes or hanging out at a friend’s house- very similar to what students still enjoy doing today.

She noted one significant difference to how she had fun in high school in contrast with current high schoolers: “We would do activities that didn’t surround our phones because we didn’t have social media. And if you had a phone, it was just a flip phone to call your friends or family.”

Xavier Theology teacher Anthony DiStefano agrees with Averbuck that the presence of phones and social media has affected how students have fun nowadays saying “that because we didn’t have the technology when I was in high school, we were forced to be little more creative with what we did for fun.”

DiStefano, who was in high school in New York from 1977 to 1981, would entertain himself in high school by “getting in a bit of trouble and just always being very physically active, whether it was through organized sports or just riding bikes around town and playing outdoors.”

“We would do a lot of the same stuff, for example playing sports, but it’s experienced through different filters nowadays,” said DiStefano. “High school students generally have the same hopes, desires and fears but some of them get altered a little bit based on how society has changed.”

He recalls playing with his friends in the snow and partaking in a creative local activity called “pogy-ing,” in which they would “hide behind snowbanks, grab the bumper of a car at a stop sign and ride behind the car.”

DiStefano highlights a change between his generation and today’s saying, “We didn’t have Life360, texting, or anything like that, so my parents had to trust me more.” High schoolers in the 70s and 80s were less supervised than high schoolers nowadays, which gave them more space for good and bad.

Another thing that has changed since Xavier’s teachers were in high school is fashion. Contrary to the current shoe style, clogs were all the rage when DiStefano was in high school. For Xavier Math teacher Eva Becker ‘94, Birkenstocks, which are still remotely popular today, were the ‘it’ shoe.

“The recycling of styles cracks me up. It took me a while to get used to the high-rise jeans that are popular right now because they were what not to wear and now suddenly they’re cool again,” said Becker, who attended Xavier from 1990 to 1994.