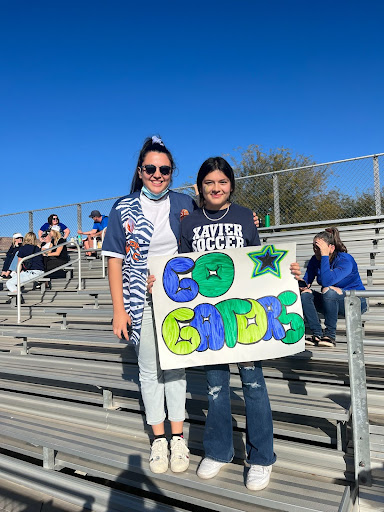 Like any Xavier sports team, the ultimate goal for the varsity soccer team is to win it all. Head coach Barbara Chura, however, believes in more than that.  “I would much rather play good soccer than win playing bad soccer,” she said. From the looks of it, the Gators played great soccer in the first round of the state championship.

Last Saturday afternoon, Xavier’s varsity soccer team fought their way through Round 1 of the 6A State Championship by claiming a 1-0 victory over Queen Creek. Before the game, Chura said, “Hopefully our passing is sharp, and if it is it will create opportunities to score.”

The Gators started strong with their offense as they held possession of the ball for a majority of the game during the first and second halves.

A few minutes into the game, forward Larkin Thomason ‘23 went up for the ball, but as Thomason was in the air, Bulldog defender Zoe Ballard came in aggressively and hit Thomason on the head, knocking her over. Thomason recuperated from this injury, however, and went on to play hard the rest of the game.

There was a lot of tension like this during the game, from the 81-degree weather to the heated crowd to the aggressive physical style of play from the Bulldogs.

The Bulldog’s defense did not make it easy for the Gators to score. Their defense, led by goalkeeper Taylor Prigge, who is named the best goalie in the state, blocked many of the Gators’ shots.

There were back-and-forth penalties from both teams during the game, including uncalled ones by the referees but there were also many missed opportunities, like goals and unfinished opportunities.

“I made a run into the box, Ansley Burns ‘22 played me a through-ball, and I took a touch to beat the goalie. I hit a great shot but a Queen Creek defender stopped it on the goal line. I feel that I could have scored that goal,” said attacking midfielder Bella Leonard ‘23.

The first half of the game was scoreless so “we went into the second half knowing we needed to score,” said Burns.

In the second half of the game, Chura put in midfielder Madison Schenk ‘24 and defender Julianne Veloria ‘23.

At one point, from the left side of the field, Veloria crossed the ball to Schenk who went for the assist to Burns, who was at the corner of the 18-yard box and saw that the goalie shifted a little to her right. Burns took her shot.

“I shot it knowing that I could play with both my right and left foot but then a girl took me out right when I was shooting it, so when I was on the ground I saw [the ball] go in,” said Burns.

After Burns’s game-changing goal, with less than fifteen minutes remaining, the Gators held onto the ball while the Bulldogs stayed on defense trying to get possession.

In the end, despite the heat, the referee’s bad calls, the Bulldogs’ tough physical style of play and injuries, the Gators maintained a strong mindset and won.

Put on a blue shirt and come support the soccer team as it makes its way through the semifinals on February 19 at Campo Verde High School.