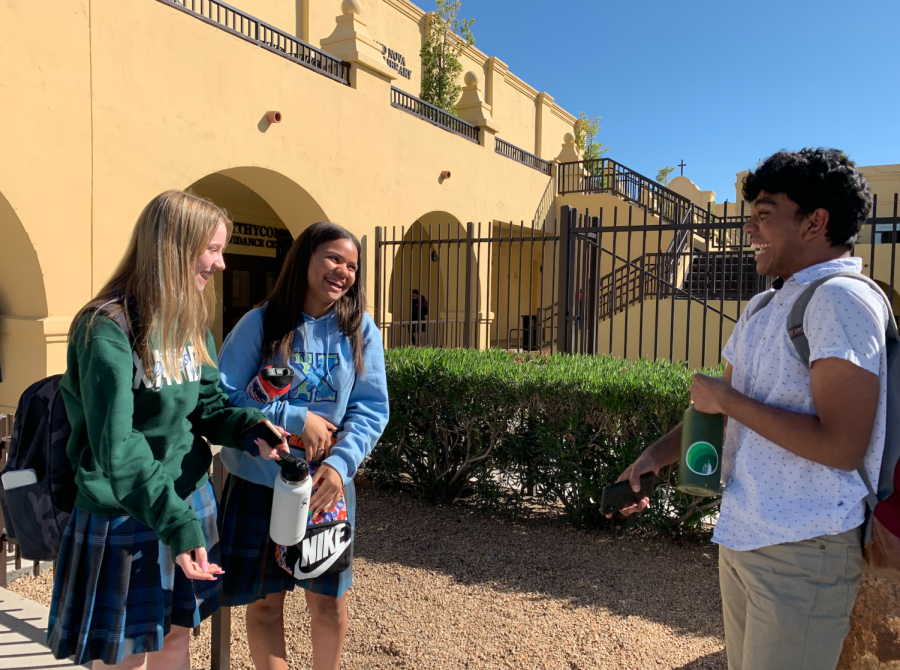 Lucy Shanahan '24 (left), Makayla Marshall '24 (middle) and Nate George '24 (right) meet to talk and laugh about a trivial matter after school. This friendship is the epitome of how men and women can thrive in friendship, especially by making each other happy through laughter.

When you first think about male-and-female friendships the first thing that often comes to mind is platonic friendships. Theology teacher Gina Iker thinks of the friendships between the Saints: Francis and Clare of Assisi, Teresa of Avila and John of the Cross, Patrick and Brigid and many more. Saints’ friendships are good examples of how to live life and how to have good and healthy friendships.

Iker explains that female and male friendships are very important. “Complementary of the sexes, they are meant to be a cooperative balance of difference, so we can often temper or balance out the strengths and weaknesses of the other,” she said.

Although this balance is important it can often be difficult to maintain opposite-sex friendships because of misunderstanding. These can come from both sides of the friendship, and because males and females are often very different in terms of how they think, the less they communicate the less they understand one another.

Over time, opposite-sex friendships have become normalized in society. They are now seen as stronger because women have also become more integrated into society. This not only encourages these friendships, but creates opportunities for them to grow and strengthen.

Within an opposite-sex friendship it is possible for both sides not to be interested in a romantic relationship, especially if they are both married, Iker believes.

Theology teacher Danielle Burr thinks it’s very unlikely for an opposite-sex friendship not to be interested in the romance aspect of the relationship. She believes one of the two will most likely develop romantic feelings. So when that does end up happening it is, “a test of the stability of the friendship.”

There is the possibility for fully platonic friendships through the type of love called agape, said Iker. This love is defined as, “divine love that seeks the good for the sake of the other, even when it requires sacrifice.”

This type of love can be seen in the Saints’ friendships.

Burr has a similar opinion that fully platonic friendships can be possible with respect and appeal from both sides but believes this is rare.

Overall male-and-female friendships are complicated circumstances. However, they are not impossible and can be formed. Opposite-sex friendships can be more easily formed through opportunities in normal societal life that exists today.

The Catholic Church encourages opposite-sex friendships and the saints show these can be formed with mutual respect and appeal for both people.