The world beyond Xavier’s gates: Ukraine’s fight for independence 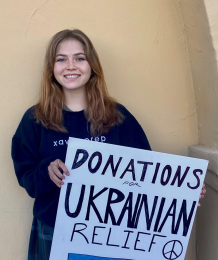 Eleanor Halaby ‘24 poses with her Ukraine fundraiser poster. She along with Tess Morrison raised $2300.

Many countries at some point have fought for the same thing, the reason for their existence. That very thing is what Ukraine is fighting for, tooth and nail, today.

On February 24, 2022, Russian forces invaded Ukraine from the north in Belarus, as well as from the south and east.

Long before the invasion took place, Ukraine had fought for its independence twice and had finally declared itself independent in 1991, proclaiming to no longer be under the control of the dissolved Soviet Union.

However, that was not the end of the Russian-Ukraine conflict. In 2014, Russia annexed Crimea, a peninsula in Eastern Europe, from Ukraine. This ignited the Russo-Ukrainian conflict that has been ongoing for eight years.

Within the walls of Xavier, Eleanor Halaby ‘24 and Tess Morrison ‘24 agreed that “from a teenager’s perspective, with a war going on across the globe, you can feel helpless. So, they thought, ‘might as well do something about it.’”

Halaby would propose the idea of a fundraiser to Director of Special Events Jennifer Tesdall, and from there Halaby and Morrison would begin to raise money. The money that was raised went towards Catholic Relief Services which will distribute it to Ukrainian families in need of food, clothing, shelter and other needs. The Xavier community donated over $2,300 for Catholic Relief Services to aid the people of Ukraine.

On March 25, 2022, Pope Francis, joined by bishops all around the world, consecrated Russia and Ukraine to the Immaculate Heart of Mary at St. Peter’s Basilica at 5:00 p.m., Roman time.

At 9:00 a.m., MST, Xavier staff and students took a moment from their schedules to pray for the Ukrainian crisis.

“From the standpoint of prayers, I know that the sisters, the diocese, and everyone are praying for the people who were affected by this. I think we are all trying to help,” said Sister Lynn Winsor, Xavier’s vice-principal for activities/athletics.

Winsor believes that everyone is trying to help in some form, whether that be in the form of prayer or by giving to charity.

“I think there is such uncertainty about what the future of all of this is going to be. For the refugees and anyone affected by this,” said Xavier’s principal Sister Joanie Nuckols.

The future is uncertain and there is no telling when the Russian-Ukrainian war will end. However, just like Ukraine has never given up on its independence, people can take a stand whether that be in prayers or donations.