How Covid-19 has affected Xavier teachers with international backgrounds 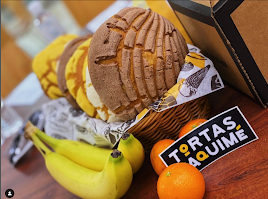 During Xavier’s 2021 X Breakfast, Tortas Paquimé provides a Mexican treat called “pan dulce.” This treat is a favorite of Spanish teacher Alexandra Lopez-Jimenez and members of her family who live outside of the United States.

During the pandemic, people all around the world were unable to see parts of their families due to various restrictions that made travel difficult.

Although she was born in the United States, Xavier guidance counselor Anna ‎Panagiotakopoulos’ entire father’s side of the family lives in Greece. Her grandparents, visiting from Greece, were in Arizona when the pandemic first hit. They would usually return to Greece at the end of March but were unable to until the end of July of 2020. “We didn’t want to risk their health by being in airports, and most flights were not happening so they got stuck here,” ‎Panagiotakopoulos said.

Panagiotakopoulos’ grandparents have come to visit in Arizona every year since she was born. She usually sees her family every three to six months, but she did not get to see them for over a year and a half after that July.

Despite complications due to the pandemic in the past, ‎Panagiotakopoulos looks forward to her regular summer visit to Greece this upcoming summer with her three older brothers and their children.

Dr. Camille King, who teaches anatomy, was born in Jamaica, moved to Maryland in 1989 and then eventually moved to Arizona in 2003. The last time she visited her family in Jamaica was in 2019 when she was able to spend time with her mother.

Since then, King has been unable to travel to Jamaica and has not seen her mother, until just a few months ago when she attended her mother’s funeral in February.

“So my mother recently died on Feb 14, 2022, and getting there was a challenge because of the limit in terms of the timing that you could have your Covid-19 testing done,” said King.

Due to these time restraints for testing, King’s brother was unable to board a flight to even attend the funeral.

Piano teacher Naoko Garrison was born and raised in Japan and moved to the United States in 2003 when she attended Arizona State University. Like King, Garrison hasn’t been able to see her family since 2019 due to three of her flights being canceled, impacts resulting from the pandemic.

She is the only member of her family living in the United States. “I’m happy working here and living here but at the same time it has been interesting, especially during Covid. It has been a little difficult,” Garrison said.