Xavier artists awarded for their work 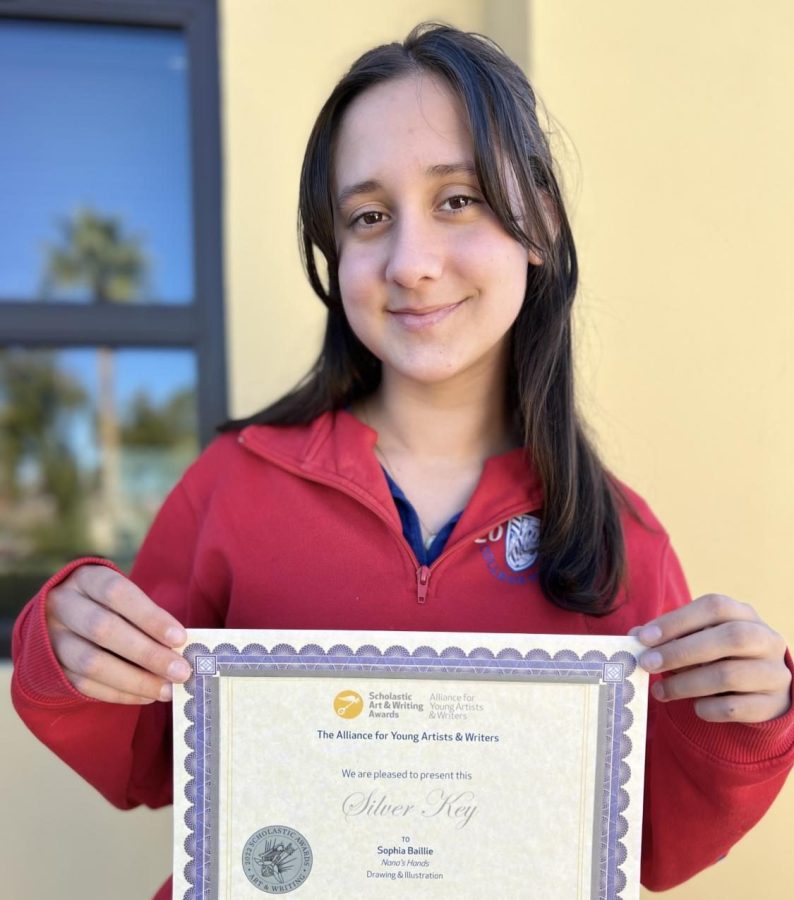 Sophia Baillie poses with her Silver Key Award. She was awarded for her drawing, “Nana’s Hands.”

Xavier’s students have always excelled in their passions, and its student artists are no exception. From intricate drawings to mixed-media collages, student artwork at Xavier is being recognized on state and national levels.

Baillie’s drawing, “Nana’s Hands,” was awarded for its originality, technical skill and emergence of a personal voice. Her work touched on themes of family and loss, about which she wrote in an essay upon receiving the award.

Not only did Baillie stand out among Arizona’s artists to a panel of judges, she was selected from an array of talented artists across the country.

Winners of this award, according to the jurors who evaluate the artists’ works, present art that “breaks from convention, blurs the boundaries between genres, and challenges notions of how a particular concept or emotion can be expressed.”

Also through the Alliance for Young Artists and Writers, sophomore Chloe Chun received an honorable mention for her political cartoon, “Catch me if you can.” Chun was also recognized by the Alliance for her writing. An essay she wrote in her sophomore English class, taught by Shannon Donaldson, received the Gold Key Award.

Another award-winning artist at Xavier is senior Lila Mago, whose piece was selected at the New Horizons Art Show at Shemer Arts Center, where she received the “Jennifer’s Choice” award.

As she explored themes of memory, change, growth and identity, Mago was “constantly inspired by the concept of movement.”

Mago’s unique approach to her work was recognized by not only the presenter of her award, but also her art teacher, Alison Dunn. Dunn said she selected some of her students’ pieces to be featured in local art shows and competitions.

Penelope Pulliam ‘22 also presented her work at the New Horizons Art Show, where her piece was purchased. It’s an honor to have your piece purchased at a show, said Dunn, who selected Pulliam’s work to be featured in the show.