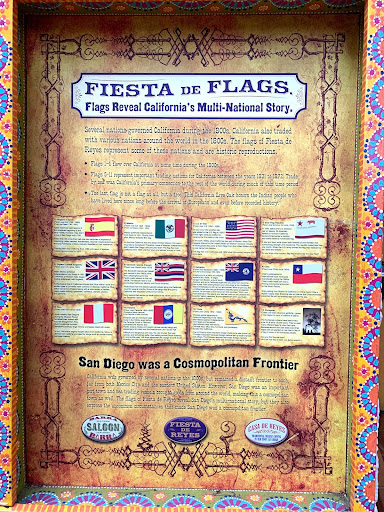 In California’s Old Town San Diego State Historic Park, a board publicly addresses the town’s multicultural diversity and its Spanish roots. The board itself includes elements of Spanglish in its title; instead of saying, “Fiesta de Banderas,” the title says, “Fiesta de Flags.” This little, yet seemingly purposeful error enhances that beauty and culture of the small, warm-feeling-filled town.

May you please put this in the licuadora? Sorry, I traduced that wrong.

In Spanish, licuadora means blender. Traducir means “to translate” in Spanish. There have been countless times in which I, my family, friends and even some classmates have come to make the dreaded mistake: Spanglish, in public.

My first language was Spanish. I learned to understand, read, write, speak and sing, although not very well, in Spanish. Learning English was a difficult transition for me in pre-K and kindergarten.

My preschool and kindergarten teacher and my school’s principal did not think that I would learn English. They both suggested that I attend a different institution, where English was the main focus.

After years of drilling my brain with the phonetics of each letter and memorizing an example of a word with each letter, I could communicate in English.

I furthered my English-learning endeavors in spelling bees and was eventually able to mentor elementary students who needed help learning to read. Now, I even write articles for my school’s newspaper.

Despite these advances, I am still prone to making mistakes in English. Furthermore, because I spend most of my time in English-speaking settings, I also make mistakes in Spanish. Neither language is fully perfected.

A few weeks ago a student in my journalism class read a text from her mom. She and her family always and only speak in Spanish. After reading the text she asked our adviser if she could use the restroom, to which he replied, “Si,” (not in a mocking way, of course).

For the first time, she had done it. She spoke in Spanish while in an English-speaking class.

This is a classic example of what happens to some bilingual speakers, like me. After hearing or reading a language for an extended period of time, you become used to it and think in that language. Eventually, you might find yourself speaking in that language, even if the surrounding atmosphere doesn’t involve it.

Throughout this year, I’ve struggled going back to English after a Spanish-filled weekend. I stutter, doubt myself, make illogical sentences… the list goes on.

No one tells you about this challenge specifically. Teachers and parents may say that learning a new language is difficult, but they don’t expand on why it is so difficult.

Is there ever a recompense for this struggle? Is there something that can compensate for the embarrassing mistakes in public or for the now weakened language that you once spoke so fluently?

Novice bilingual speakers bombard themselves with these questions when learning gets tough or when they make these “embarrassing” mistakes. Some eventually believe that becoming bilingual is more of a burden than it is a reward. Why risk embarrassing yourself by having a two-language filled sentence when you can avoid doing that?

These ideas are right and logical. That is, until that one rewarding opportunity comes along and changes everything.

Giving directions in Spanish, explaining how something works in German, answering a question in Swahili and countless other multicultural encounters slowly and gradually begin to support bilingualism.

Besides making a polyglot look good on a resumé, these experiences begin to build the backbone for one’s bilingual, trilingual, or multilingual endeavors and they brightly shine as the long-awaited reward. The light at the end of the tunnel is reached.

Of course I sometimes feel silly when my friends look at me weirdly and ask, “What did you say?” if I happen to mix up a sentence. However, I feel proud that I am able to do that. I am able to say something in a different language; it might not make sense in a mixed sentence, but then I just find the right word in English. Problem solved.

Sometimes I also try to find the sentence in Spanish, just to not let that one Spanish word stand alone.

These mistakes strengthen bilingual speakers. A mistake like this doesn’t end the world; it betters it and makes it diversely beautiful. In addition to accents, these mistakes are signs of bravery.