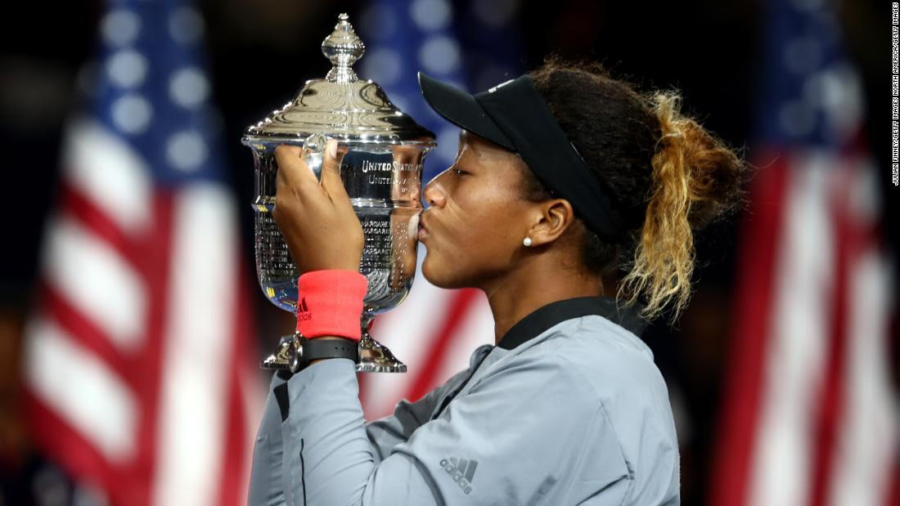 Naomi Osaka took on Serena Williams, the number one American professional tennis player, in the women’s final for the 2018 U.S. Open tennis tournament at the USTA Billie Jean King National Tennis Center in New York. On Sept. 8, 2018, Naomi Osaka and Serena Williams went against each other in the singles category. This certain match was the most anticipated since Naomi has looked up to Serena as her idol and inspiration her entire life.

As the game score came out to a 6-2, 6-4 victory against Serena Williams who had lost her game due to the umpire controversy.  In the end, the result showed mixed emotions (go check Emma Carthy’s article in Opinions). The Washington Post shares that before receiving her trophy Naomi’s last words to the crowd were “I’m sorry it had to end like this.” When sharing a moment with Serena Williams, Naomi tells Serena, “I’m really grateful I was able to play with you.” After the tournament, Naomi Osaka was ranked seventh in the world, six ranks behind Serena Williams.

Naomi Osaka is the first Haitian descent/Japanese to win the Tennis US Open regardless of man or woman. She is the next Japanese tennis headliner after the incident of another Japanese player, Kei Nishikori, who lost in the 2014 US Open for men’s singles.

The Women’s Tennis Association and Japan Times go into Naomi’s history of her birth home and how being born in Osaka, Japan changed her life. Being born to a Japanese mother, Tamaki Osaka and Leonard Francois, a Haitian, had large effects on her life. Growing up in Japan, but moving to the states at a young age, Naomi faced a lot of questions about her origin. When asked in interviews about where she is from, Naomi tells them she is from Florida, where she spent the majority of her life since the age of three. This was her answer to avoid being made fun of her birth place and last name.

Not only do Serena Williams and Naomi Osaka share their love for tennis, they also share the same technique quality. Both of them also have sisters, Venus Williams and Mari Osaka, who also play professional tennis. Just like the Williams sisters, who dominated over the courts, the Osaka sisters are an equal threat to be anticipated for the future of tennis.

Naomi Osaka was 20 years old when she won her title and is now the reigning US Open champion in women’s singles. Something that can be learned from watching Naomi Osaka win is her love and focus that she outputs into playing tennis. Naomi stands as a hero and a role model to all women no matter what race or age. She has defied all odds and proved to the world how powerful she can be. Senior Cara Coffman sees Naomi as “someone who changed the world of tennis.” And truly, she is someone influential in the future of women and tennis.