How do Xavier girls stay active? 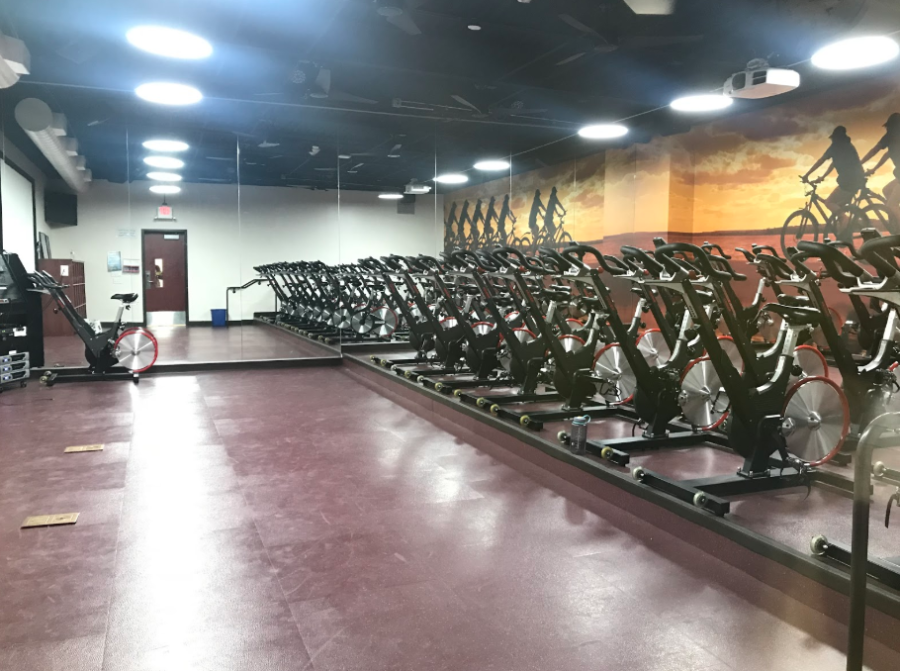 Many people do not know that Xavier has its very own spin and yoga rooms. They are located in the upstairs of the Activities Center next to the dance room. Yoga classes are held during 1st, 6th, and 7th period as elective in the yoga room and the spin room is used by the mountain biking team and Dean Macrina for “Get Lean with the Dean”. Photo by Taylor Brown ‘20.

Xavier is well known for its athletic success and though many Xavier girls have participated in at least one club or sport at some point, some find other ways to stay active outside of school-related activities.

When walking down the hallways or sitting at lunch, it is not uncommon to hear a Xavier girl complaining about having to go ‘work out’ after school. When thinking of working out, running on the treadmill, lifting weights or using an elliptical are often things that come to mind. However, these methods of exercise could be considered boring and, luckily, there are much more fun ways to exercise. Why dread working out when there are many fun, unique ways to stay active? Some of these fun ways to stay active can even be found here at Xavier, as yoga classes and spin classes are offered as electives and after-school activities.

One unique style of exercise commonly done outside of school is indoor cycling. Cycling classes are high tempo, intense workouts that are designed to go along with loud, upbeat music. Although the workout takes place on a stationary bike, fast pace cycling and use of choreographed dance moves, along with small weights, help to keep the class engaging and fun; according to OneDifferent.com, spin is a great way to get a cardio workout in, work leg, back, and upper body muscles. Some of the most popular cycle studios in the Valley are the Madison Improvement Club, which has locations in Phoenix and Tempe, as well as Sweatshop on Central and Studio 360.

Cyclebar is another popular studio and with three locations in the Valley. Junior Catherine Humphrey often finds herself taking classes at their Scottsdale location. She says that spin classes “feel more like a party than an actual workout, but I still get a great sweat in and feel really rejuvenated after”.

Xavier offers spin classes on campus as well. Dean Macrina started her own series of spin classes called “Get Lean with the Dean”. These classes are held weekly in the fall in Xavier’s spin room in the upstairs Athletic Center. This is a great way to try out a spin class!

Another form of fitness that is becoming more and more popular in the Xavier community: hot yoga. The traditional view of yoga is a soothing class and insane flexibility often come to mind. A twist on traditional yoga, hot yoga is another unique form of exercise that offers many benefits. Doyouyoga.com says that some of the biggest benefits of hot yoga are the “cleansing” effect that is caused by sweating toxins out of the body, along with better cardiovascular circulation and a stronger immune system, all of which result from the warm environment. In addition, the heat is supposed to help stretch limbs and make muscles more flexible, which helps with many of the more difficult yoga poses. However, according to Healthline.com, participants need to make sure they are hydrated before taking a hot yoga class, as the temperatures in hot yoga rooms are usually around 105 degrees with 40% humidity. It is important to always prepare before working out and hydrating before hot yoga is no different.

There are many fitness places offering hot yoga such as The Biltmore Studio, which has locations in Phoenix and Scottsdale, Radi8 Hot Yoga, Hot Yoga Studio, Core Power and many more.

Junior Mikayla Chavez regularly goes to classes at both Core Power and Radi8 Hot Yoga. Mikayla says that she “enjoys hot yoga more than other forms of exercise because it is the most effective in helping me to get rid of any stress I feel. I get to experiment with different poses and improve my balance and breath work. The heat makes the class more challenging than normal yoga so I have to focus more”.