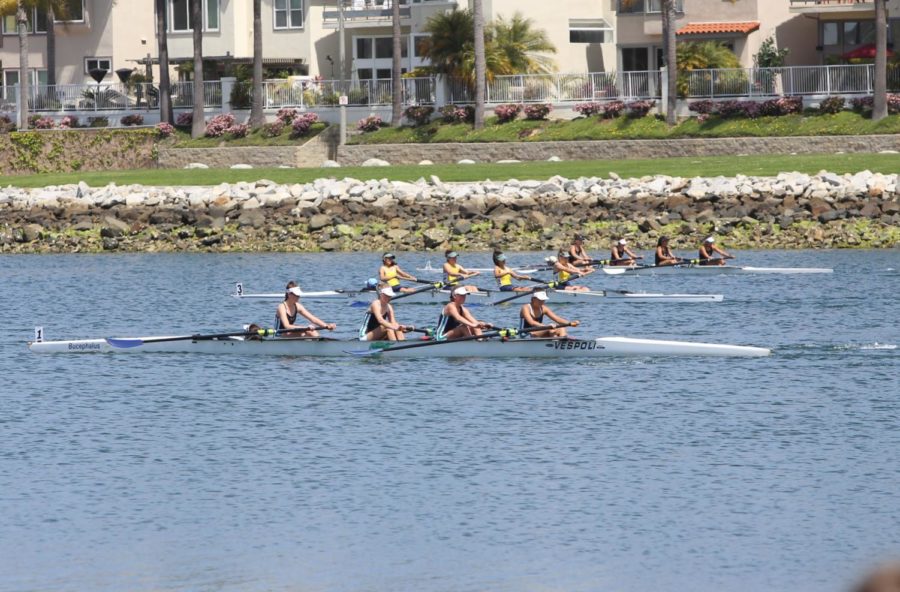 Crew is a sport at the center of “Operation Varsity Blues”, one of the biggest college admissions scandals in the country. Xavier Crew athlete Olivia Petrine, who is trying to get recruited as a coxswain, spoke on how wrong and unfair this whole faux recruitment scandal is. Photo courtesy of Olivia Petrine ‘20.

On Mar. 12, one of the largest college admissions scandals, named “Operation Varsity Blues,” was exposed by federal prosecutors. According to the Wall Street Journal, over 50 wealthy individuals were involved in a fraudulent scheme to guarantee their children’s admission to elite colleges and universities. In many cases, parents paid anywhere from one hundred thousand to over one million dollars to falsely designate their children as recruited athletes in less popular sports in order to gain admittance to the university of their choice, according to The New York Times. While this news was initially a shock to many Americans, other people, including Xavier students, did not seem so surprised.

Xavier’s athletic program and stellar student-athletes come to Xavier for a great education and to play on competitive sports teams that compete for titles every year. Many Xavier students want to be student-athletes in college and see Xavier as the platform to do so. Xavier girls work extremely hard to earn good grades and balance their athletic commitment with schoolwork. It is discouraging to hear about wealthy teens cheating their way into elite colleges as “recruited athletes” when there are so many hardworking students that dream of being offered a spot at such schools.

Many student-athletes trying to be recruited to play collegiate sports begin the recruitment process as early as eighth grade or freshman year. In order to get recruited to play collegiate sports, especially at a NCAA Division 1 university, a student must have good grades, test scores and be a stellar athlete in their respective sport. To get as much exposure to college coaches as possible, student-athletes have to make the best, most competitive club teams that practice and play games year-round. These high-level teams often participate in national showcases that are designed for recruitment purposes. In addition, many chose to attend identification camps or workouts at specific schools in order to build relationships with coaches. Attending these camps can mean sacrificing time at school or time with family and friends. Before and after attending camps, student-athletes have to keep up communication with coaches and assistant coaches via email or by a phone call. Junior soccer player Megan Onofrei shared her own perspective on the athletic recruitment process, saying that “as an aspiring recruit for college soccer, the process is very demanding because you need to have consistent communication with coaches through emails and must travel to camps to perform at your best in front of the coaching staff.”

College recruitments is a huge financial and time commitment for student-athletes and their families, many of whom are relying on athletic scholarships in order to go to attend college. There are many student-athletes out there who work extremely hard and will never get an offer to play at the collegiate level. So many athletes dream of continuing their sport, but spots on athletic teams, as highlighted by this incident, are taken by children from wealthy families who have faked their status as an athlete. In the case of Operation Varsity Blues, sports with smaller markets such as water polo, tennis, crew, volleyball, sailing, and soccer, among others, are being used as a ploy to get into the college. One of the most notable cases of recruitment fraud was committed by Lori Loughlin, who paid half a million dollars to designate her two daughters as recruits to the Crew team at the University of Southern California. Junior Olivia Petrine, a coxswain on Xavier’s crew team, shared that “coxing in college is a big dream of mine and it always has been. It’s upsetting to know that someone received that honor due to the advantages that they were born into and not worked for.”

Many of the schools involved in these scandals have storied athletic programs. According to The New York Times, schools involved include the University of Southern California, Stanford University, the University of California at Los Angeles, Yale University, Wake Forest University and the University of Texas at Austin, among many others. These universities attract some of the country’s finest student-athletes who have worked extremely hard to receive an athletic scholarship. Onofrei adds that “hearing about this scandal is really discouraging because there are people like myself who have dedicated so much time and money to the recruitment process and are genuinely trying to get recruited the right way.”

Many universities have already started investigations and are now facing lawsuits of hundreds of millions of dollars from students and applicants because of their connection to this admissions scandal, according to The New York Times. Coaches have been fired and are now facing legal ramifications and it is unlikely that coaches who are proved to have accepted bribes will ever coach at the collegiate level again. This scandal sets a tone for the near future of college admissions and recruiting. Coaches must be more careful than ever and make sure that they are following every NCAA recruiting rule. Deans of universities and university athletic directors will surely be monitoring recruited athlete lists much more closely, as they will try to avoid risking the reputation of their academic institution and athletic teams. Petrine concludes that “looking forward, I hope people realize why this is wrong and how unfair it is for people with power and money to use it as an advantage to obtain a goal that isn’t necessarily theirs.”