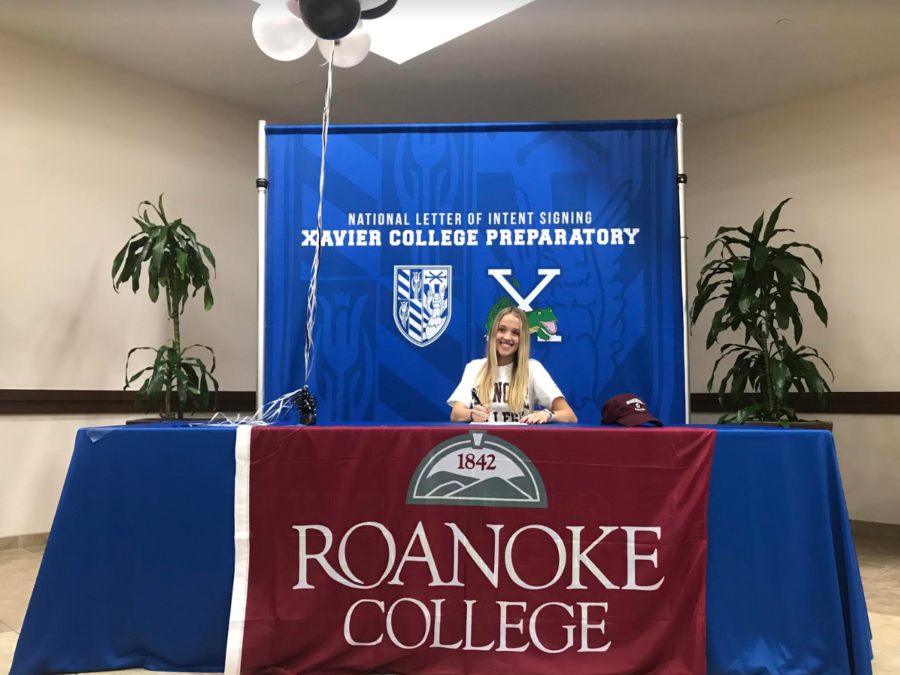 For decades, Xavier College Preparatory has been both an academic and athletic powerhouse. In addition to preparing students for the rigor of college courses, Xavier continually develops outstanding athletes.

Xavier’s renowned athletic teams are a large source of student involvement and pride on campus. Being part of a Xavier sports team requires dedication and hard work. At Xavier, every athletic team excels and strives to improve every week. Due to the notable success of Xavier sports teams, student-athletes gain exposure at both state and national levels through regular-season matches, post-season games, and national showcases or tournaments.

Every fall and spring, Xavier hosts National Signing Day events to celebrate the hard work and successes of student-athletes who will continue their respective sport after high school graduation. This year, Xavier celebrates ten who signed to play six different sports at universities across the United States.

The first signee of the day was Senior Katie Donahey, who signed to play softball at Yale University in New Haven, Connecticut. Donahey hopes to study Economics. Go Bulldogs!

Senior Taylor Killoren signed to be a member of the crew team at the University of San Diego. Killoren will study  Pre-Pharmacy.

Senior Olivia Petrine signed to row as a coxswain on the crew team at San Diego State University. Petrine is considering a major in Biology and chose SDSU because she “loves the school and the upbeat, competitive team environment.” Go Aztecs!

Senior Jazmine Knight signed to play Division 1 volleyball at Virginia Commonwealth University in Richmond, Virginia. At VCU, Knight plans to major in Interdisciplinary Studies with a focus on psychology, criminal justice, and forensic science. She adds that “Virginia Commonwealth University is a very special place. I love my coaches [and] they are really invested in me as a player and person. VCU has a good athletic and academic environment that I will be able to thrive in and learn about the real world. Being in Richmond just makes me so happy. Go Rams!”

Finally, Senior Megan Onofrei signed to play soccer at Roanoke College in Salem, Virginia. Onofrei is still deciding her major, but is currently leaning towards either History, Political Science, or Psychology. Onofrei says she is “so blessed and honored to sign to play collegiate soccer. Roanoke has both excellent academics and athletics that will provide me with real-world experiences. The atmosphere on the soccer team is so welcoming and being at Roanoke makes me so happy.”

Xavier is so proud of each and every student-athlete that signed today. The environment of Xavier athletics and academics has prepared these student-athletes for this next chapter of their lives. The Xavier community is looking forward to celebrating their future successes and is very grateful for their contributions to the Xavier athletic program.