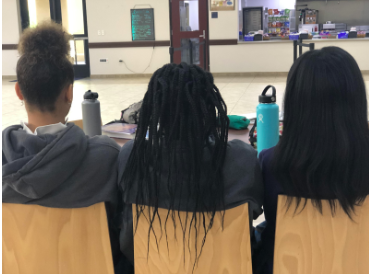 As Black History Month comes to a conclusion, it is important to remember that while the month is a time to celebrate important figures in black history, it also celebrates black culture. There are many parts of black culture that are celebrated like food, music, and literature. However, there is one significant part of black culture that isn’t widely talked about: the significance of black women’s hair. [I need another sentence here]. A problem that many black women seem to face is when people touch their hair without permission. This is a problem that is even seen on Xavier’s campus. And as a student of color who prides themselves on their hair and what it means to them, I have experienced the unwanted touching of my hair. Now, I understand that those who have touched my hair are filled with pure intentions, but I would like to point out to everyone that it is possible to admire someone’s hair without interacting with it.

I want my readers to understand that the purpose of my article is not to call anyone out or make anyone feel uncomfortable for their past actions. I am just trying to help you become more educated and grow in your understanding of the significance of a black woman’s hair. As a woman of color, I understand that when people touch my hair they do so out of admiration and curiosity; however, it is important to remember that not every woman is going to have that same understanding. The purpose of this article is to explain the discomfort that women of color may feel when you do touch their hair.

There are numerous reasons why women of color don’t like having their hair touched. One reason is that when you touch a woman’s hair without their permission, they feel like their personal space is being breached. No one likes to be touched randomly, especially when by someone they don’t know. Another very important reason is that it can mess up their hair. Having multiple hands in their hair every day will cause their hair to either get frizzy or lose its shape. Expanding on this, Triniti Cheatham ‘20 explained: “I put a lot of time and effort into doing my hair and I don’t like that someone would mess up my hair if they touch me.” For a woman of color, doing their hair is a process that takes a lot of time and effort.

Many women regard their hair as just another part of your morning routine. But for women of color, our hair is much more than that. Having ethnic hair is different than having naturally straight hair. To begin, there are different ways to describe a woman’s hair type. These are called curl patterns and are used not only to tell someone what kind of curls they have but to help them better care for their hair. Another point to make is that the type of curls a woman has can often tell what their ethnicity is. For example, biracial women who are half black and half white often have looser curls while mixed women who have more than two ethnicities have curls that are tighter. Furthermore, different hairstyles can tell a lot about a woman’s background and identity. Anyang Celbirio ‘20 explains this in saying “The length, texture, and thickness of my hair tells other tribes in my home country which tribe I belong to.” What Celbirio is saying is that her hair isn’t something that is attached to her head, it’s her identity.

In the end, it is important for people who don’t have ethnic hair to be understanding to people who do. There is nothing wrong with admiring someone else’s hair. Nor is there anything wrong with wanting to learn more about a person and their heritage. However, the problem lies with crossing someone else’s boundaries and personal space even when you don’t mean to. We all come from different backgrounds and ethnicities. It’s always beautiful when we connect with someone and share our cultures with others.