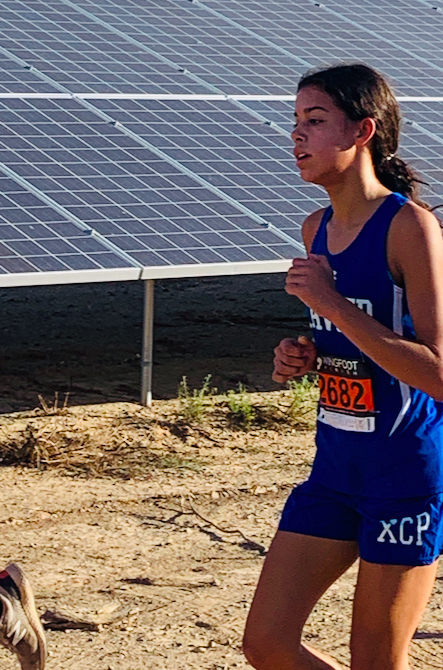 Naomi Young ‘23 maintains her speedy pace during the final mile of the sandy 5k course at the Eye of the Tiger meet on October 24, ultimately finishing 16th overall in the Varsity Gold race.

Cross country is the only Xavier fall sport that regularly practices in the morning rather than the afternoon. This is done primarily to avoid the heat of the late summer months.

Consequently, any girl who chooses to run cross country at Xavier has a drastically different lifestyle than nearly all of her classmates. However, this lifestyle gradually becomes a comfortable norm for the runners, who practice at 5:15 a.m. on a daily basis and usually have their lights out by 9:30 p.m.

This season, this routine was stripped from cross country teams across the state due to Covid-19. Everything from the daily practices to the 5k races were formatically altered to limit the virus’s spread and to ensure that the season could continue without pause. Races were often organized into waves determined by school so that there would not be as many runners in close contact with each other. As a result, the runners were not always racing their entire field of competition like they did in the past.

Hannah Wheeling ‘22 is one of the top four runners on Xavier’s varsity squad this season. She agrees that “the separate waves [during races] and the masks when warming up” as well as the regular temperature checks and small groups during daily practices were the biggest changes caused by the virus this season.

Coach Dave Van Sickle, who has been coaching the Xavier cross country team for 31 years, believes that the most significant change this season was that his team missed out on “spending time together before and after practice.” They also were unable to hold their annual summer cross country camp, so the Xavier runners did not have as many opportunities to form the tight-knit bonds they usually do.

However, Grace Teevan ‘22, a top JV runner for the Gators, says that one positive aspect of these alterations was that she “made friendships that [she] would not have made had this not been the scenario.” Overall, Wheeling asserts that although cross country “feels different from it was before, the regulations are meant to keep everyone safe.”

Even though these alterations were strange and often inconvenient, they permitted the Gators to have as close to a normal season as possible this year. One unique aspect of cross country is that it is both an individual sport and a team sport, with seven varsity runners on each team competing both for personal records (pr’s) and for overall team place.

Teevan establishes that her goals for the season were to “perform well despite the different circumstances” and to “build friendships with the younger girls as an upperclassman.” Besides making lasting friendships, she states that her favorite part of cross country  is “that feeling of gratification and accomplishment she gets after running.”

On the team side of things, Coach Van Sickle stated that his expectations for Xavier this season were for “everyone to have a great state race” and, if so, he would “expect [them] to be anywhere from 2nd to 4th place” overall at the Division 1 State Meet.

The Gators did not disappoint, placing all of their five scoring runners in the top 50 at state on November 12 and managing a gap of only one minute between these five runners. Since only one of their top 7 runners will graduate this year – Jamie Stelnik ’21, who finished 17th in the state this year – the Gators can anticipate a strong season next year as well as a season that will hopefully include some normalcy.