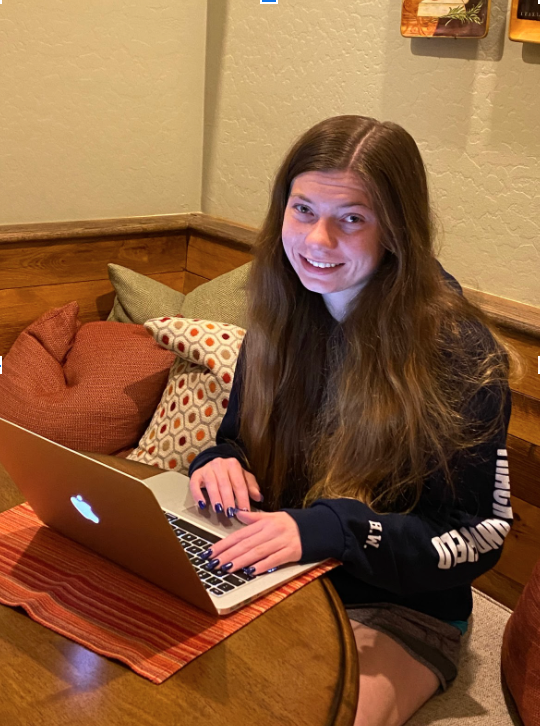 Hannah Wheeling ‘22, a participant in the Elder Outreach Program, checks her email for communication from elderly Xavier alumnae.

There is no question that the age group most devastatingly impacted by the Covid-19 pandemic is that of senior citizens, people aged 65 and older. In October 2020, the CDC estimated that approximately eighty percent of all Covid-19 deaths were from people in this age range. In addition to the increased health risk that they face as the virus spreads, members of this age group have also suffered mentally and emotionally as many have isolated themselves from their loved ones to minimize their chances of testing positive. More than ever, they have found themselves needing to use technology to communicate with their family, friends and coworkers – something that does not always come naturally to them.

Xavier’s Computer Science Honor Society (CSHS)’s Elder Outreach Program resolves to help these elders with their technological struggles and questions. The idea for this program first occurred to Catherine Wyman, a computer science teacher at Xavier, at the wedding of one of her former students.

“I was sitting around the table with my friends from Andre House – a charity dedicated to assisting the poor and the homeless –  and one of them wagged her phone at me and said ‘See this?  I have no idea how to use it.  We really could use a class!’” Wyman said.

After considering her friend’s comment, Wyman realized that CSHS is full of students who are very adept at using phones and began to wonder if she could get the  two populations together.

This was not the first time a similar thought had come to her, and she wanted to fully act on it this time. She began to work closely with Natalie Para ‘21, an officer in CSHS, to coordinate a program that would effectively and beneficially merge the two age groups, having current members of CSHS aid elderly Xavier alumnae with their technological and digital questions.

“We knew how lonely many of our elderly were, being cooped up as a result of the pandemic. Catholic teaching tells us that we must ‘provide an option for the poor and vulnerable.’  When it comes to being online, the elderly are vulnerable,” Wyman said.

One of the difficulties the up-and-coming program faced was the same one the elders it targeted for help dealt with: health risk. Wyman and the CSHS officers decided to solve this by having the Xavier participants resort to a communication form geared more toward the elders: handwritten letters sent to their mailboxes, with the elders having the choice of contacting the Xavier girls by mail or by email later on.

In October, Wyman and Para emailed all of the members of CSHS, informing them of the program and the opportunities it provided for them to both earn service hours and to assist former Xavier girls. Sabrina Le ‘22 was one of the program’s willing volunteers.

“I signed up for the program because I was interested in ways I could give back to the community, especially using computer science and helping the older members of our community gain a bit more exposure to technology that they may have not had before and helping them, as many things have become digitized,” Le stated.

The girls who decided to participate in the Elder Outreach Program received yellow packets filled with form letters to hand-write to each elder they were assigned to; lists of their set of elders’ names, addresses, and graduation years; Xavier-issued stationary; and envelopes.

The letter-writing process was time-consuming, often taking each girl about three hours to write five letters to her group of elders. However, Le and others also found it to be rewarding. Although Le has only received a response from one of her elders and several have yet to respond to her first letter, she identified her favorite part of the program as “learning about the elders she wrote to and about their current lives and experiences at Xavier when they attended.”

Due to the success of the program and the positive feedback she has received from both the CSHS members who took part in it and the elders they reached out to, Wyman is pondering whether to extend the Elder Outreach Program beyond the pandemic. She stated that CSHS has also started working on another project to create educational pieces targeted for the elderly about Internet safety.

Hannah Wheeling ‘22, a junior who participated in the program, thinks that it should continue at least in the short-term, specifically “through quarantine because elders still might want help with their technology, and writing to them is an easy way to connect.” Le voiced that she believes this is “a program that should continue beyond the pandemic because although it was born out of a greater necessity of understanding technology for older members of the community, it is important for people to be exposed to technology and have access to aid, especially as things are becoming increasingly digitized.”

The program did not just benefit the elderly alumnae, however. Le found her communication with them interesting because she, after they shared their own experiences at Xavier with her, was able to learn what has changed and what has remained the same at Xavier.

“I think it’s interesting what we can learn from our elders,” she concluded.