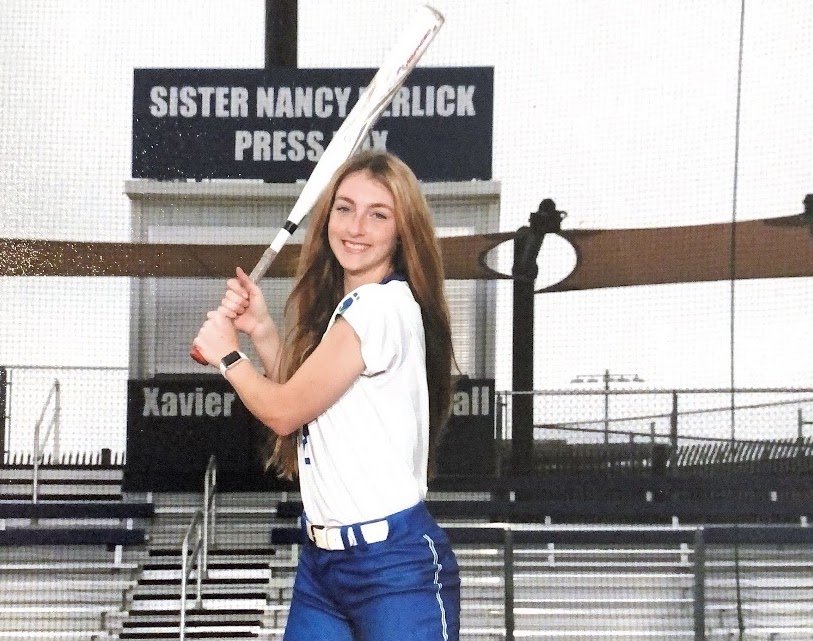 Bridget Donahey, who was recently ranked the 17th best softball player in the class of 2022 in the nation, poses for her softball picture on Petznick Field at Xavier College Prep.

Bridget Donahey, a junior at Xavier College Prep, has been nationally recognized as one of the best softball players in the class of 2022, and in February, Donahey was officially ranked the 17th best high school junior in the nation.

This ranking is significant because of the scope of the competition. There is an enormous number of girls in the high school class of 2022 in the United States that play softball. According to the NCAA, it is estimated that 362,038 girls play high school softball across the country.

When asked what this achievement means and shows, Donahey said, “It is an example of my community. They have all supported me all the way until here so I think it takes a village. It really goes to show how supportive everyone has been for me.”

Donahey has been working hard since a young age to get where she is today. She has played softball competitively since she was in second grade, and has been a part of Xavier’s softball program since her freshman year. She grew up in a softball family, so was surrounded by the sport growing up.

Her family has been a major part of her softball journey, especially through example, leadership and support. Donahey said, “My family definitely has been my biggest supporters. All of them played softball so I just kind of followed in their footsteps and they were super encouraging.”

Donahey plays shortstop on Xavier’s varsity softball team, the position she has played since her freshman season at Xavier. On her club team, she plays third base and catcher.

Versatility is one of Donahey’s greatest strengths. Brad Downes, head coach of the Xavier varsity softball program, said, “Bridget is very athletic and there is nothing she can’t do on the softball field.  She pitched as a freshman and can play any position on the field well.” This ability to play any position is a rare quality in athletes, and it is one factor of Donahey’s greatness that makes her stand out.

Donahey contributes even more to her team than her incredible talent. Recognizing the other aspects of what she brings to the team, Sister Lynn Winsor, vice principal for activities and athletics, said, “She’s a leader by example and she certainly makes a difference in the games with her hitting skills and the way she behaves out there. Her sportsmanship and attitude are really outstanding.”

When asked what her favorite part about playing softball is, Donahey said, “The people. They are all super hard-working and super nice, and I think my best friends have been formed through softball.”

Donahey has verbally committed to Northwestern University. Downes attributed this to “her determination as a student-athlete” and said, “She competes hard and is motivated to perform at a high level on the field and in the classroom.”

Northwestern University’s women’s softball team is a Division 1 NCAA team. Of her commitment to Northwestern, Donahey said, “I am excited. It’s been a long time coming, so I’m excited to be there soon.”

Xavier has been very lucky to have Donahey as a part of their softball program, and the whole community is extremely proud of her and her achievement. Winsor said, “We’re so proud of her because of her hard work and dedication in the area of softball. We are also very grateful for everything that she’s done for Xavier on the Xavier softball team.”