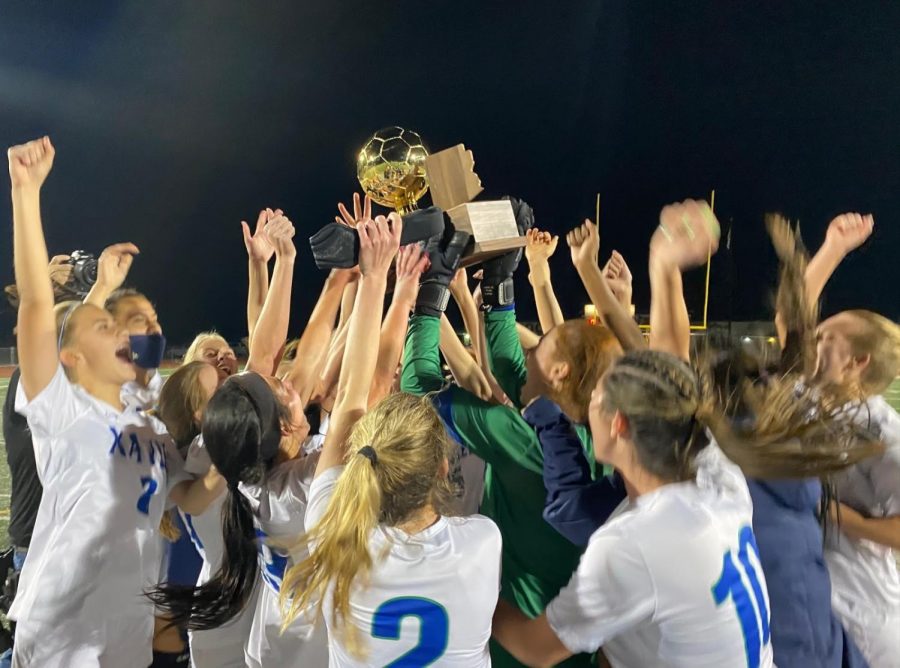 On Friday, March 19, at Campo Verde High School the Xavier varsity soccer team won the state championship game in a decisive victory over Chaparral High School, the defending state champions. The Gators, ranked number five, won with a score of 2-0 over the number three ranked Firebirds.

Xavier started out strong and gained an early lead when junior Hennesy Perez scored the first goal of the game in the first six minutes. She scored the goal after senior Megan McGinty crossed the ball to her.

Of her goal, Perez said, “Anytime you score it’s exciting but scoring in that type of a game was so unreal and an amazing feeling that I will remember it for a really long time.”After this goal, Xavier held off Chaparral from scoring and went into halftime with a score of 1-0.

Starting out the second half, the Gators came out and continued to play hard, not slowing down once. In the last few minutes, sophomore Eva Allen  scored the second goal of the night off an assist from freshman Talia Coury, who made an incredible run down the field past several Chaparral defenders to make the pass.

Throughout the game, Xavier played amazing defense and nothing got through the tough defenders. Junior Ansley Burns, sophomore Tessa Montanile and freshman Coury all had an outstanding night on defense and protected their goal with everything.

Goalkeeper Jaden Campbell, a senior, had several great saves throughout the game. She never let down her guard of the goal and was instrumental in winning the game by stopping the Firebirds from scoring in several close calls.

The Gators went into the state championship off a very exciting win against number one seed Perry High School, where Bella Leonard shot a goal from the 41-yard line in double-overtime with three seconds left on the clock. Of going into the state title game, Barb Chura, head coach, said, “I felt really good because we had been progressing every single game.”

When asked how she felt heading into the championship game, Leonard said, “I think we were all nervous, but our energy was so high right before the game. We were all just super energetic and more excited than nervous to go out and win.”

This amazing end to the season comes after many challenges and difficulties throughout the season. In December, the Arizona Interscholastic Association (AIA) had voted to cancel winter sports, and it looked like there would be no finish to the season.

Then, after many people across the state signed a petition to have the AIA bring back the season, they reconvened and revoted, changing their decision so that the season could continue.

The varsity soccer team also had to stay online throughout the season and were not allowed to do school in-person so that there would be no chance of the team getting a Covid-19 outbreak. Now that the season is over, the girls on the team are allowed to return in-person.

“The best feeling during the game was when that final whistle blew and everyone just rushed towards one another and we all had a massive group hug,” said Perez. “Just being able to breathe in and take in the moment was just surreal.”

According to Chura, this win was the culmination of all the hard work put in throughout the season. “We put in a lot of work as coaches and players to get to this point, and when you finally accomplish the goal you set out to do back in November, it’s exhilarating. This is why we play.”