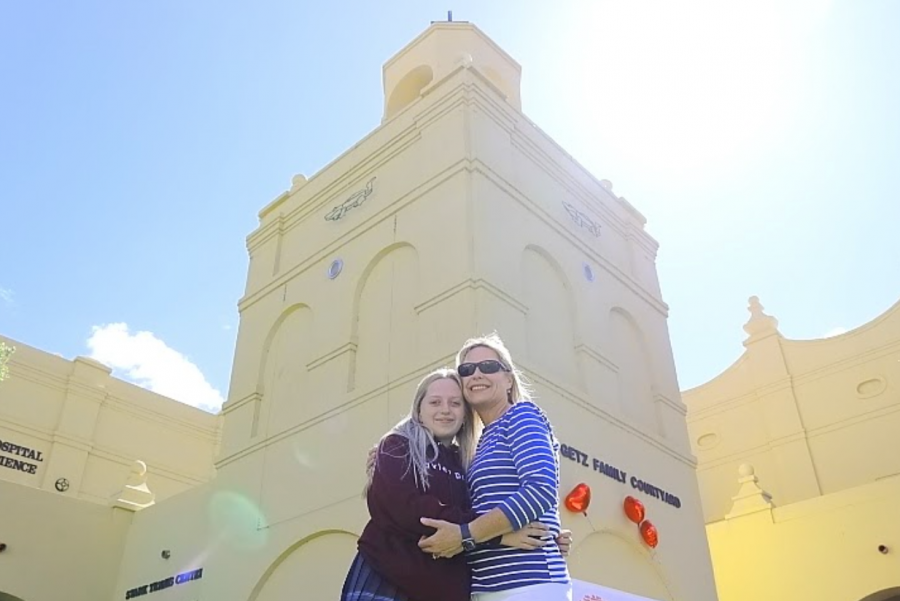 Elayna Pennell and her mother Tiffany Albers ’89 pose by the Bell Tower. During their interview at Xavier, Albers reminisced as she compared the physical structure of Xavier from when she attended to now.

As its goals to open up to more diversity and to create a strong legacy continue, Xavier remains steadfast in its commitment to honor tradition, whether that tradition is through current school events or through alumnae.

A well-known tradition that Xavier is a proponent of is celebrating Xavier alumnae and their choice to send their daughters to Xavier as well. This celebration is most emphasized in the Golden Key Award.

“The Golden Key Award is an award that is given to graduating seniors whose mothers and/or grandmothers graduated from Xavier,” said Xavier’s Director of Advancement and Alumnae Relations, Polly Fitz-Gerald ’68.

The celebration of the Golden Key Award dates back to the early 1960s. This is because the first senior class of Xavier graduated in 1947, and their children were beginning to enter Xavier at this time.

Although mother-daughter legacy is primarily seen through the Golden Key Ceremony, which emphasizes the graduating class of seniors, Xavier also focuses on tradition in every grade level through other events.

“I think it’s wonderful that these women felt so good about their Xavier education that they wanted their daughters to have the same education and experience, because it really is an experience, coming to Xavier. It’s more than an education,” said Fitz-Gerald.

Though tradition is often thought of as strict and unvarying, it must be acknowledged that tradition does not always continue without experiencing some type of change, whether to the tradition itself or to the environment surrounding the tradition.

From the time current Xavier mothers attended Xavier to now, much has changed at Xavier. Those changes include the various additions of buildings, the new classes available and new clubs and teams forming, but much is the same.

Ellie Stark ’90, the mother of senior Rylie Conrad, said she sent her daughter to Xavier because of the bonds she made, the level of education and because she wanted to establish a tradition. Her favorite thing about Xavier from when she attended was the sisterhood between her friends and herself. Now, her favorite thing about Xavier is that her daughter gets to experience the same type of friendship.

Conrad said her favorite thing about Xavier is the rallies. As for what she learned, she said, “I have learned the importance of hard work and friendship.”

A difference between these two generations is that Stark was able to experience off-campus lunch, whereas current students must remain on-campus.

Elayna Pennell, a freshman, and her mother, Tiffany Albers ’89, also experienced some differences between their years at Xavier.

When Albers attended Xavier, the only building was Fitzgerald Hall. “That’s all we had. So, none of this was here,” she said, gesturing to the athletic center, Chapel of Our Lady and Founders Hall.

Additionally, instead of having a cafeteria, students would order from a snack bar and sit in the hallways to eat. Albers said, “There was a snack bar which had the best pretzels and cheese. I couldn’t tell you how many days I ate that for lunch; it was delicious.”

Both Pennell and Albers said their favorite thing about Xavier is that it is an all-girls school. With this advantage, they are given more confidence.

Anne Wuycheck ’88, mother of sophomore Margaret Wuycheck, and alumnae Michaela and Murphy Wuycheck, said she sent her daughters to Xavier because it was always important that they have the opportunity to study and learn in a Christ-centered environment. “My hope and prayer for my sweet daughter is that she just continues to grow, learn and experience all that the next couple years will bring. I hope she stays close to God and has a blast!” she said.

Throughout her years at Xavier, Anne made several long-lasting friendships and even met her future husband, a Brophy Bronco. This social skill was passed down to Margaret; she now sits with her friends where her mother and her best friends sat.

Other traditions Anne passed on to Margaret were participating in clubs and getting involved. When she attended Xavier, Anne participated in PubClub. Now, Margaret not only participates in Pub Club, but is also an NHS member, a student ambassador, a class officer for her sophomore year and was voted for the office of stewardship for the next school year.

Overall, tradition does not simply mean participating in something that can be passed down. Tradition means experiencing and learning from the past to better the future. As the great composer Gustav Mahler once said, “Tradition is not the worship of ashes, but the preservation of fire.”