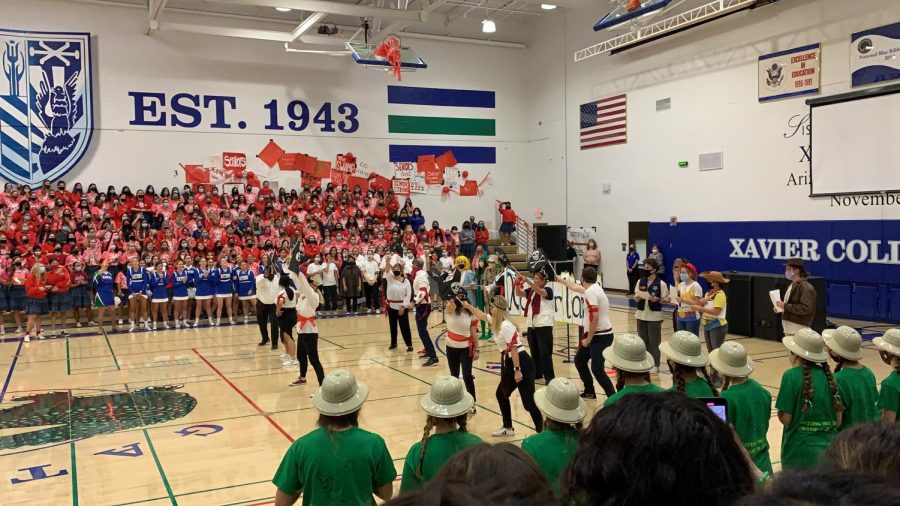 The Xavier faculty triumphantly dominates the court with their “Pirates of the Caribbean” themed dance. In participating, the faculty not only joined the fun, but allowed the students to get to know them through their enthusiasm and school spirit.

Once again, Xavier started off its school year on a high note – this time by incorporating an amazing rally into the beginning of the school year.

Rallies have come to been known as one of the best strategies of cheerfully gathering and enthusiastically displaying school spirit. Classes come together to show their school cheer and demonstrate their love for their school and their own classes.

In fact, some of the best known high-school movies include a rally. “Grease” has a bonfire, “Napoleon Dynamite” has a dance in an auditorium and “High School Musical,” well, it needs no further elaboration.

After overcoming a year full of restrictions, a rally was just the thing Xavier needed to foster a sense of community and cheer in the new school year.

Jennifer Tesdall, Xavier’s Director of Student Activities, said, “Because there are so many teachers and also students who have gotten the Covid vaccine and who have been wearing masks, we felt that having everybody together was extremely important, and the safety was there.”

After consideration about safety regulations, Xavier decided to set the long-anticipated date for September 9 at 8 a.m.

As the promising day of the rally approached, Xavier’s Executive Board comprised of senior leaders, ultimately decided on the main theme: Xavierland. Consequently, each class was given a sub-theme.

When the much-anticipated day arrived, Gators did not fail to meet the rally’s standards, which challenged the classes to successfully mix their corresponding themes to their dances. Students not only met, but passed this challenge with flying colors.

After the sports teams debuted their unparalleled dancing skills, each of the freshman, sophomore, junior and senior classes were called to challenge each other in what can only be described as a dance battle.

Amelia Feix, a junior student council member, said, “It was stressful, but at the same time, as soon as we got into it, we kind of got back into the groove and it was nice to have a rally again.”

Concluding the dance-off was an intense round of voting. Although Gators were not “voting for Pedro,” a select panel of Xavier teachers did vote for which grade level would be dubbed the winners of the first school rally of the year.

In this case, the seniors meritoriously won the rally and were designated the winners of the 2021 Fall Sports Rally.

Senior Cecelia Nguyen said, “It felt so good to win the rally! I think this was such a good victory for us because it showed that we can do this, and it’s so much fun. I feel like we really came together; this was just a really happy moment for us.”

However, the other important winners of the rally were the freshmen and sophomores, who prior to this, had never participated in a Xavier rally.

Recounting last year’s rally, sophomore student council member Asiana Guang said, “Last year, because of Covid, not everyone was in the gym, so the atmosphere was not as fun; whereas this year we had all the grades and the atmosphere was so good.”

As the new school year begins, it’s always important to look back to times of togetherness and remember the good memories and bonds students make at rallies. As Gabriella Montez would say, or in this case sing, “We’re all in this together.”