13 Gators sign national letters of intent: What exactly does that mean? 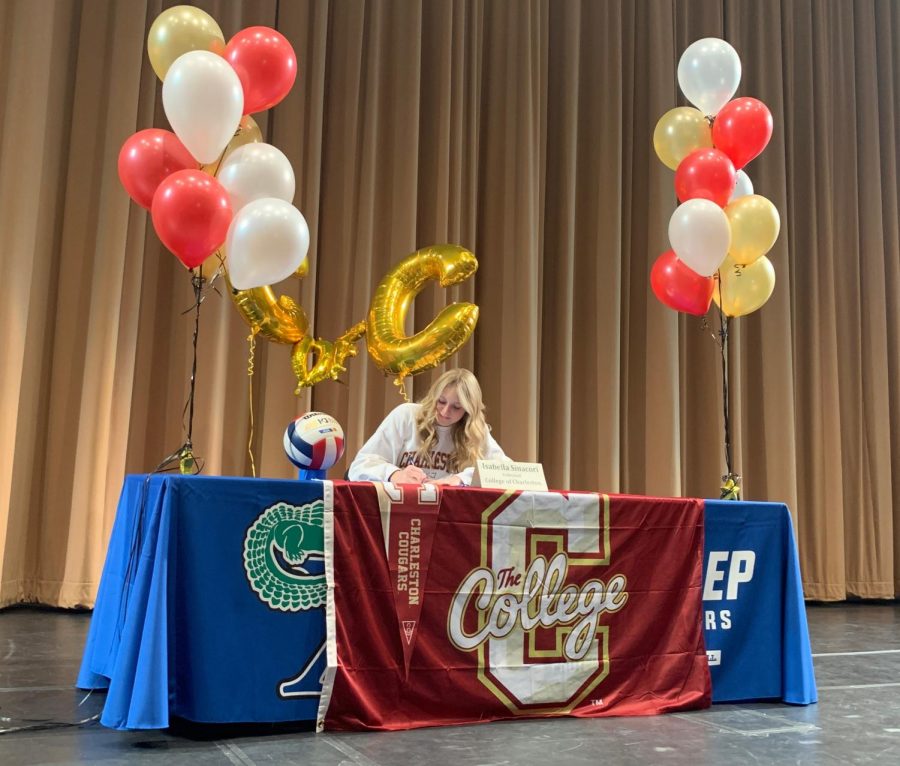 Isabella Sinacori signs a national letter of intent to play volleyball at the College of Charleston on the morning of Wednesday, November 10, at Xavier College Prep’s signing ceremony. Twelve other girls from Xavier also signed national letters of intent on this day.

This fall, 13 seniors from Xavier College Prep signed national letters of intent to play their sports at the collegiate level. While many recognize that this signing is an incredible honor and opportunity for these students, it is common for nonathletes to be unaware of the full process leading up to it and everything it entails. So, what is a national letter of intent, and what is involved in the process of committing to a college?

A national letter of intent is a contract between a student-athlete and a college, in which the two commit to the student-athlete attending and playing her sport at the college where she is signing.

The process begins for most signers in their sophomore years of high school. Sister Lynn Winsor, vice principal for activities/athletics, explains, “First of all they would write an initial letter to any of the coaches of the colleges for the sport that they’re in, then if they get positive responses they send emails back and forth.”

An athlete is not allowed to speak in person with any coach until, depending upon her sport, either the summer after her sophomore year or early in her junior year. Until then she can communicate with coaches either through emails or letters.

Meghan Schouten, who signed a national letter of intent to play softball at Boston College, commented on how this part of the process looked different because of Covid-19 for this year’s seniors, saying, “At the time I couldn’t go to multiple schools because of Covid, so I basically got recruited through video.”

Explaining what is next in the process, Winsor says, “After all this communication back and forth, after five official visits, then it’s the process of evaluating, working with coaches, seeing which coaches you like, which schools you like or the academics you like.”

“The process is very intricate, but once it is done you are then rewarded by the fact that you signed this national letter of intent,” Winsor added.

The 13 student-athletes signed their national letters of intent at Xavier’s letter-signing ceremony on Wednesday, November 10. Their families, friends and coaches were all able to attend to witness the signing and to help celebrate the commitment.

“It is a dream come true. It’s something that I have worked for for pretty much my entire life and I never imagined myself playing Division I softball, because I was always told ‘You’re not good enough to play Division I softball,’ and it just means the world,” Schouten said, on signing her letter of intent.

Xavier’s first national letter of intent signing ceremony was held in 2000. Winsor described the beginning of this tradition, saying, “Originally it was all about football and basketball for boys. But with Title IX we started to think we should do this for our girls. Their scholarships are just as valuable, just as good.”

Lamar-Renee Bryant, head volleyball coach, commented on the importance of these ceremonies, saying, “Being an athlete is tough. They’ve missed sleepovers, they’ve had to change vacation plans- all of these sacrifices. When they’re on the stage at that moment, I feel like it’s all worth it because this is what they wanted and it’s what they worked for. To be able to celebrate them is such a great thing.”

This February and May, there will be signing ceremonies held for more Xavier seniors to sign national letters of intent.