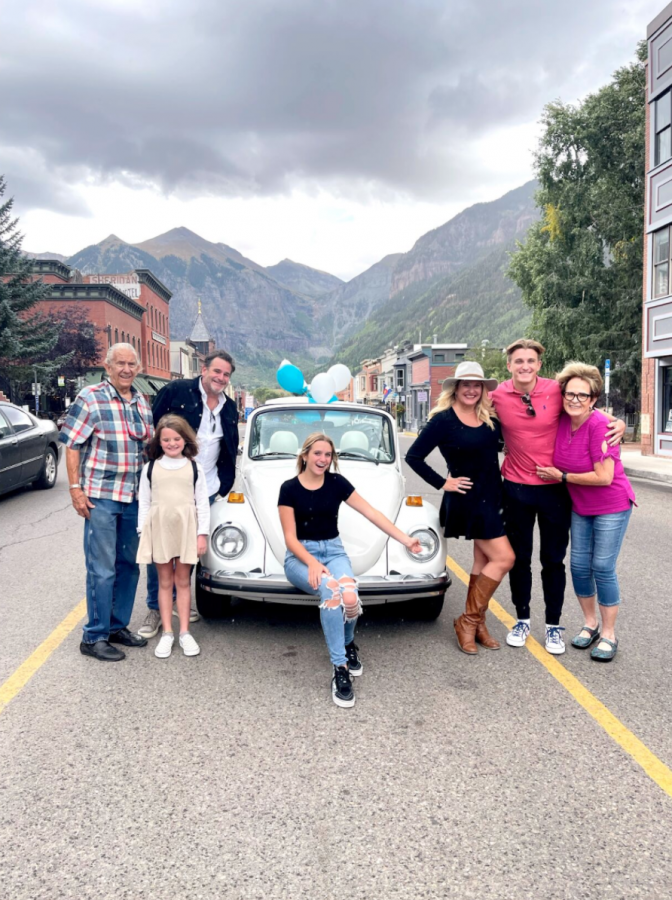 In the streets of Telluride, Colorado, Xavier alumna Stanya Pawlowski Gorraiz ‘91 surprises her daughter Pippa for her 15th birthday with the same 1979 convertible Volkswagen Beetle that Stanya herself drove in high school. The vintage restored car has had several owners in various states before being reunited with its original owner, thanks to Stanya’s Xavier class ring being found underneath one of the seats after almost thirty years.

After being stuck underneath the seat of a vintage car for almost thirty years, a Xavier 1991 class ring was found by a man, Doug Fitchett, in Seattle.

While Fitchett was repairing his 1979 convertible Volkswagen Beetle, he found the ring which had engravings of Xavier College Preparatory, the owner’s initials, and the owner’s graduating year.

Fitchett contacted Xavier and a Xavier alumnae relations coordinator was able to match the initials to its owner, Stanya Pawlowski Gorraiz ‘91.

Xavier then called Gorraiz to give her Fitchett’s contact information and inform her that Fitchett wanted to return the ring to her.

When Gorraiz called Fitchett, she realized that the VW Beetle that the ring was found in was her car first car from high school.

Gorraiz’s father, Stan Pawlowski, originally bought the car for his three daughters who attended Xavier. The car was passed down from sister to sister until Gorraiz, who is the youngest, graduated from Xavier.

After Gorraiz left for college, the Gorraiz family sold the VW Beetle to a buyer in Florida.

The car lived in various states, but ultimately ended up in Washington when it was sold to Fitchett, all while Gorraiz’s class ring was hidden under the seat. “The stories that class ring would tell if it could talk,” said Polly Fitz-Gerald, director of alumnae relations.

Before returning the ring to its owner, Fitchett’s wife, a jeweler, replaced the missing stone in the ring free of charge.

“It’s so cool that somebody would take the time when they find a class ring to try and reunite it with its owner. But also the fact that they had the missing stone replaced for free before sending it back to me just reminds you of human decency,” said Gorraiz.

Being reunited with, not only her class ring but also her very first car, inspired Gorraiz to buy back the VW Beetle and pass it down to her daughter, Pippa Gorraiz, who is now a high school student in Colorado.

Gorraiz struck a deal with Fitchett, who was happy to reunite the VW Beetle with its original owner to be passed onto future generations. Gorraiz secretly saved up for three years to buy the VW Beetle and surprised her daughter Pippa with the car for her 15th birthday.

“It’s a pretty cool thing that occurred and it all happened because of my Xavier class ring, so that makes it even more special!” exclaimed Gorraiz.

Xavier alumna and current Xavier world history teacher Stephanie Brugger was part of the class of 1991 with Gorraiz. “I grew up with her my whole life until she moved. She was a good friend of mine and an XPress newspaper editor when she went to Xavier,” said Brugger.