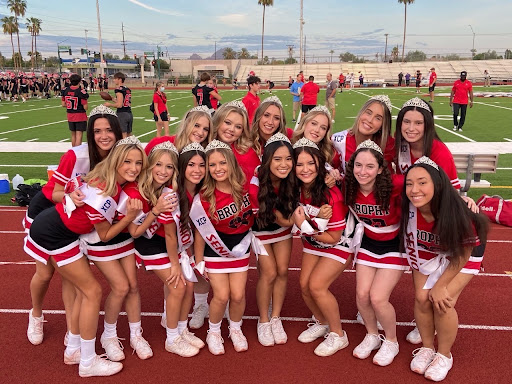 All the spiritline seniors gathered for a picture on the field before the game. They had just finished getting their sashes and crowns after walking across the field with their parents.

With the fall sports season ending, Xavier’s sports teams have been commemorating their seniors on team senior nights with fun celebrations, such as gifting goody bags to seniors, making posters and more.

The volleyball team ended its season with a team lunch to honor the hard work and immeasurable effort the seniors put into the team’s overall success.

The younger Gators on the team wrote speeches for each senior, expressing how much love the team has for them and wishing them luck for the exciting life ahead of them. With the help of the Xavier volleyball moms, baskets were also organized for the girls with various goodies, such as t-shirts, blankets, water bottles and candy.

Bella Sinacori, a volleyball senior, stated, “We enjoyed all the energy surrounding senior night and the support that everyone showed us. We are so thankful for all of the generosity shown by the faculty, staff, students, parents and coaches that made senior night possible.” The volleyball seniors had a great senior night that they will never forget.

The swim and dive Gators had their senior night before their state meet, celebrating the seniors before competing in their last high school level meet. The freshmen, sophomores and juniors worked together to create fun posters for each senior on the team.

Senior Claire Douglas said, “Senior night made my heart soar. My teammates made me feel so supported and loved.” The seniors also received crowns and boas, which made the seniors feel extremely special.

While the tennis girls also did posters, they focused more on the team as a whole by having each person on the team give speeches celebrating all the seniors, rather than focusing on one individual senior. Each senior Gator on the team received a goody basket with her favorite types of candies, water bottle and T-shirt.

Other teams, such as the crew, archery, and e-sports teams, chose to give the seniors flowers at their last practice and tournament. These flowers were a sign of congratulations for their achievements and luck for their futures.

Spiritline had its senior night at a football game with the Brophy football seniors.

While the Gators usually have to wear low ponytails when performing at football games, the coaches allowed the girls to style their hair differently for senior night, with most girls curling it. The team members also gave the seniors sashes before they walked across the football field with their parents for pictures.

Senior Ari Orr stated, “Senior night was truly made special by my teammates. I felt so loved by my spiritline family, and I will miss that the most when I graduate!” The contagious love on senior night, and in general, will forever be remembered by the seniors as a special moment between the team.

Similarly, the cross country seniors received boas instead of sashes and had posters made for each of them by the younger runners on the team.

Gatorline had quite a similar night planned for their seniors. During one of their basketball games, the seniors were given flowers and goodie baskets with their favorite candies. Each team member also wrote little notes to each senior, congratulating them on their success in high school and explaining how much they will miss them.