Xavier archers keep aiming for the bullseyes as State approaches 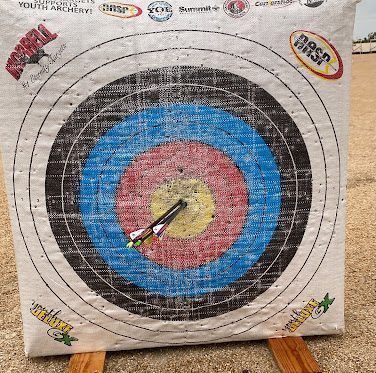 At the first practice of the year, GG Conti ‘24 started strong by shooting a bullseye with each arrow.

Almost every high school in Arizona has tennis teams, soccer teams and basketball teams. Xavier is widely known for its excellence in these popular sports. However, not many Arizona high schools boast an archery team, but Xavier does, and it has produced stellar results.

Many of the current Xavier archers joined the team with little formal experience. “I got involved after I saw archery listed as a sport when I was applying to Xavier,” Talia Udelman ‘24 remembered. “Archery was always fun at summer camp, so I decided to come to tryouts freshman year.”

GG Conti ‘24  had only ever participated in archery through Girl Scouts prior to her time at Xavier. “When I found out there was an archery team, I figured it would help with my focus, and that I could find something different to do,” she said.

Through consistent practice, rookies like Udelman and Conti have developed the adept skills needed to succeed in archery tournaments. They, along with the Brophy archery team, meet once to twice a week, depending on experience, at the Ben Avery shooting range by Lake Pleasant.

According to Conti, a typical practice session is one in which the archers “start off with stretches and prayer.” Next, they move on to learning and trying out a specific part of shooting, a part that switches focus weekly.

“Normally there are two to three groups, one works on the actual shooting and the others work on breathing work and band work,” Ana Bhatti, a senior leader on the team, said. “Archery isn’t just an aiming sport. It requires perfect form and a clear mind.”

But the learning lingers with the girls long after they have packed up their bows and arrows. “We are expected to write in our journals when we go home to figure out what works best for us and to keep track of our progress,” Conti stated.

This intensive preparation results in the team feeling comfortable and ready for their competitions. Udelman asserted that competitions, which are either at home at Petznick Field or away at locations as far away as Wickenburg, are “usually around one to one and a half hours” and are “split up into different time slots.” There are two different categories of shooting that the archers can sign up for: bullseye, where they aim at the common ringed target, or 3D, in which they shoot at what Udelman referred to as “plastic animal statues at different distances.”

Bhatti explained that before the actual competition commences, the head coordinator “goes over rules” with the competitors, and they are then “dismissed to the waiting line and wait for the two whistle blasts to occur. At each of the two ends of the bullseye competition (sets of five arrows), there is one practice round to find your aiming point and to relax.”

At their last event, the competitive  state qualifier on November 20, the Gators placed four archers in the top ten scoring positions in both the bullseye category as well as the 3D category. “We’re getting ready for state, our next competition! We got third place in bullseye last year, so this year we’re going for gold!” Udelman emphatically stated.

Bhatti, who placed seventh in the bullseye division at the state qualifier, says that state is the weekend of December 4 and 5. “The rest of this season is coming to an end, but then there is another season – the spring season,” she said.

Beyond the thrill of the technical elements of competitions, there is one part of the Xavier archery experience that stands out to all three of the interviewees. “Everyone on the team is so nice, and it’s so fun just chatting on the sidelines during practice while waiting to shoot,” Udelman clarified.

Conti agreed. To her, being on the team is “a fun way to see friends and compete without all of the pressure that is typically added, especially as a beginner.”

Bhatti also pinpointed teamwork as the often unspoken but ever-present highlight of the sport. “We are a family, including the Brophy team,” she concluded. “Every now and then, we have mini competitions against each other at practice, but at the end of the day, we are still family.”