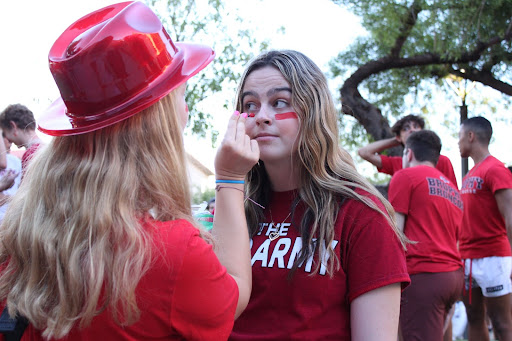 As the Brophy campus fills with eager students, senior Katie Carlson decks out senior Kate Tax in red paint at the first tailgate of the year. Students prepare to storm the stands of the Central High School football field for front row views.

As Xavier girls shuffle their way into homeroom on Friday morning, you can hear the hallways buzzing with one question: “Are you going to the game tonight?” Some students such as sophomore Allyson Brown believe it is “something to do” while others like senior Holland Carey think that football games are “some of the best nights of my life.”

Ditching their distinct plaid skirts for the weekend, Xavier students pack the stands in another kind of uniform, a Brophy T-shirt. Xavier and Brophy students share school spirit for both schools throughout the game, creating chants and games every student can participate in.

Tailgating before the football game is the kickoff event of the night. Parents, students and even teachers gather together before the big walkover to Central High School. “What more could you ask for?” said senior Taylor Serrano.

The walkover is a tradition unique to Xavier/Brophy that students have grown accustomed to. Since neither school owns an appropriate football field, football games take place at Central High School, which is a short walk down the canal.  This tradition, used to generate excitement and energy before games, essentially grew out of a safety precaution: no student walks alone on the canal.

There is no denying that football games are a distinct part of American culture, giving students like Serrano the chance to“fully involve myself in the high school experience.”

Many current high school students were deprived of this Friday night classic during the Covid-19 pandemic that swept the nation in 2020. “It took a toll on everyone,” said Serrano.

Although high schools will never be the same, football traditions have resumed and are in full swing.

No matter how big of a football fan a Xavier Gator is, she can always make lasting memories. Senior Anna Pisoni reminisces on the Homecoming 2021 football game, Brophy vs. Chaparral, when students “rushed the field” after Brophy secured its win in the last minutes of the fourth quarter.

Although Xavier students create lasting memories, there can always be room for improvement. Executive Board secretary Eva Allen said students “need to get more involved.” There is a stark contrast between underclasswomen and upperclasswomen experiences at football games, a likely reason there is less involvement than hoped for. Carey, in her experience, said she was a “timid freshman at the top of the bleachers quietly watching the games and now a senior enjoying some of the best nights of my life with my friends.”

Current tradition includes seniors getting front row spots in the student section while underclasswomen are offered spots towards the top of the student section. Seniors enjoy the perks of standing with the famed “letters” which Xavier students can count on to “always hype up the stands,” according to Pisoni. The term “letters” refers to the Brophy students, painted in letters spelling out Brophy, who are known for their gameday spirit.

The spirit does not stop there. Accompanied by a student DJ, Xavier Spiritline (national title holders) cheer on the Broncos with daring stunts and animated choreography.

This year something new was added to the mix: a student run T-shirt cannon that launches a free shirt every few minutes.

So next Friday morning say yes when your friend asks if you are going to the football game. It might just be the best night of your life. 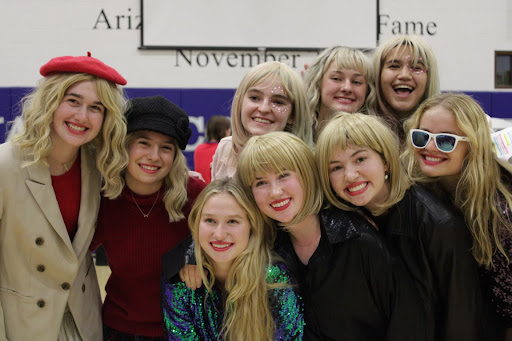 Executive Student Council Board members smile in their Taylor Swift costumes after successfully completing the first rally of the 2022-2023 school year, “The Battle of the Taylors.” All the hard work they put into the preparation of the rally paid off.

XCP Gators “can’t stop, won’t stop moving” as they dive into the new school year with the annual fall sports rally. As part of tradition, Xavier had its first rally of the year to kick off school spirit and to remind all the students of why they love Xavier. Rallies are a big part of the school and many students describe rallies as their favorite events of the year.

“The student council does a really good job getting the crowd excited and it’s really fun seeing everyone in our class come together,” junior Maya Nagaraj said.

But what set this rally apart from years past was the Taylor Swift theme and the tie between the freshman, junior and senior classes.

A vital part of all rallies is the theme, as everyone looks forward to what Xavier’s Executive Board, composed of seniors, comes up with. This year, the board thought to incorporate a most beloved singer, Taylor Swift, by making the theme the “Battle of the Taylors.”

Executive board member Holland Carey said, “Exec board spends the weeks leading up to the rally preparing for what direction we want to take, such as creating our video, the theme and costumes.”

A different Taylor Swift album was given to each class to fulfill the Battle of the Taylors theme. The freshmen received “Lover,” the sophomores assumed “1989,” juniors gathered “Reputation” and the seniors acquired “Red.”

On the day of the rally, all Gators did not come to just play. The fall sports teams, cross country, volleyball, badminton, mountain biking, golf, swim and dive and spiritline each performed a dance in correlation to the theme. A group of teachers even joined in on the fun, and showed off its own dance to Taylor Swift’s song “You Belong with Me,” bringing laughter and joy from the student section.

When recounting being a part of the student section in the rally, junior Kiera Basco said, “I think rallies are really beneficial for us to come together as a community.”

Of course, it would not be a Xavier rally if not fueled by friendly competition. After the fall sports teams performed, it was time for the long-anticipated class dance battle.

The freshman, sophomore, junior and senior student councils each performed dances requiring a lot of work, including impressive stunts and songs relating to T-Swift albums. Each class also participated in a scream-off to see who was the loudest and showed the most school spirit.

Once the dance battle and scream-off were over, the suspenseful wait for the winning class began. After the votes were in, the Executive Board announced that there was a tie between the freshmen, junior and senior classes. This came as a surprise to everyone, as a three way tie is not common for Xavier’s rallies. But since there had to be a winner, judges gave the victory to the juniors.

“I felt very happy about the win and that it was well-deserved, especially for this being the first rally of the year,” junior student council president Joslyn Jenkins said.

Carey commented on the three-way tie by saying, “Even though it was very controversial, it stood out as a testament to how hard everybody worked.”