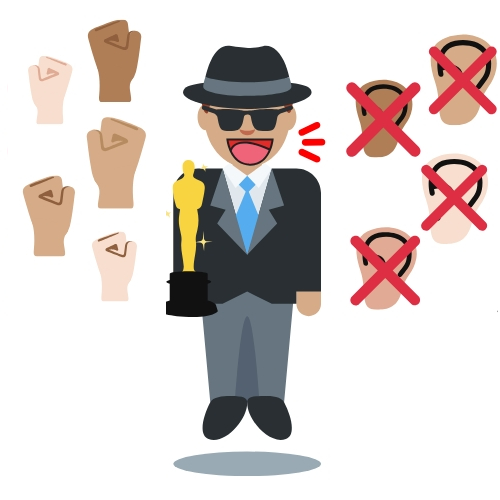 Are Award Shows the Proper Platform to Discuss Politics?

In the distant past, award shows have been a platform only for comical hosts, touching acceptance speeches and the occasional scandalous wardrobe malfunction. But the year is 2019, and the times have most definitely changed. For the past few years, award shows have been just as much of a political showcase as a celebration of the arts. Whether it’s through a politically charged acceptance speech or satirical jokes made by the host(s), there is simply no escaping the world of politics- on the red carpet or off. This raises the question: are award shows the proper platform to discuss political matters?

While some may reminisce at the old, simple era of award shows, I argue that politics absolutely belong at these events. There are a few reasons for this. First of all, we can hope that when the camera pans around the event hall of whatever award show it may be (The Academy Awards, Golden Globes, etc), we see a rainbow of races, genders, and sexualtities. As Hollywood becomes more diverse, it becomes more populated by groups of people who are directly affected by the policies that are being put into action each day in our country. It would be somewhat irresponsible for hosts and winners, who have the voice to reach millions of people, to not use this voice to discuss the issues that affect the people around them. In addition to this, the platform of award shows allows hosts and winners to speak about politics in a light hearted, satirical way. In this day and age, it is very rare that a group of people can discuss politics without the issues being polarized or fought over, as opinions often become too strong to coexist in peace. The humor and casual matter with which politics are brought up in the bits presented by hosts allows these matters to be discussed and brought attention to, without fights being started. In fact, the actors in the rooms of these events are often open to even have themselves made fun of, and more often than not, they play along. At the 2019 Golden Globes, for example, Co-host Sandra Oh brought up the controversial and highly political issue of whitewashing when she called out Emma Stone for her role in the 2015 movie, Aloha, where she was criticized for playing a Hawaiian Asian character. Oh shot the scrutinizing joke out against Stone, saying ” “Crazy Rich Asians” is the first studio film with an Asian American lead since “Ghost in the Shell” and “Aloha.”, to which Stone called out from the back of the room “I’m sorry!”. It was a lighthearted joke about a serious issue, and was handled with a lighthearted apology. Some may argue this is how all political issues should be dealt with, and the platform of award shows allows this to happen with ease and comedy.

In today’s modern world, one saturated by the entertainment industry and overrun by intense political contrast, popular culture presents a line where these two extremes must blend. On a national scale, this intersection is demonstrated via award shows.

Many advocates of award season and its allotted extravagances believe that these events serve as a platform for political discussion while also avoiding argument. However, the problem with this goal seems to be that only one political perspective- that of the Democratic party- is historically expressed, creating a “safe space” with zero political diversity. Hence, a new, grander form of political polarization is underhandedly promoted, preventing those with opposing views from wanting to watch such ceremonies at all. These shows lose viewers on the Republican side of the political spectrum, contradicting their so called goal of avoiding polarization by hindering the range of the viewer pool itself, due to the political tint of the “light hearted” comments made all throughout the events.

Another controversy surrounding shows like the Oscars, the Emmy’s and Grammy’s is the exclusive nature of the programs themselves. Attended by, arranged for, and hosted by the rich and famous, award shows serve as an excuse for stars to give themselves praise and cleverly named statues, and the rest of the world happily watches these performances. But why? From a political perspective, some believe that award shows give influential people a wildly public platform for the advocacy of “hot-topic” issues. Yet, when delved further into, the famous individuals who preach such messages completely contradict them with their ways of life. Comically referred to as “limousine liberals,” award shows are ground-zero for millionaires advocating for wealth distribution, Hollywood A-listers rooting for the “little guy,” and the most influential names in the entertainment industry condemning the corruption of the powerful.

On average, Hollywood contributes 150 million dollars- each- into such award shows every year. 50 million of that total goes into hosting the event, and 100 million is spent on advertisements. After realizing such staggering cost margins, one has trouble listening contently to an actor or actress’s speech about poverty and class divisions, all being emotionally recited between the categories of Best Original Screenplay and Best Animated Short Film.

Award shows seemingly have a long history of exemplifying wealth and privilege during times of crisis, the first Oscars event premiering the same year as the start of the Great Depression, 1929. However, it is only within the last decade that award winners’ speeches have been sprinkled with contradicting remarks about the state of the country, all the while evidently using their fame and fortune to remain in the more lucrative portions of the 1%.

I believe that the convergence of politics and entertainment can be a beneficial way to spread awareness, but I firmly emphasize that the usage of award shows, specifically, to do so is antithetical and naive. The award show circuit itself is a politically contradictory gathering of some of the richest men and women across the globe, the events themselves being hosted by those who are celebrated, reinforcing a vicious culture of egotistical entertainers and the public’s idolization of them.