Being more than a number 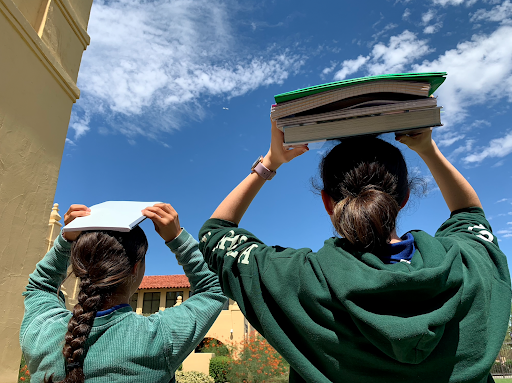 Two students, seniors Lily Nelles and Sophie Saia, are staged to compare themselves on intelligence levels based on the amount of books they read and on the amount of homework they have. Nelles said, “Personally, I think it’s a good thing to compare yourself to other high-achieving individuals because then you want to be like them; it’s good when it’s a growth mindset. But when it’s a fixed mindset, like ‘I’m never going to be as good as her or as smart,’ then that’s just negative. I learned that from my psych class.”

“Did you register for the SAT? What did you score on the ACT? Was this score high enough for the PSAT? What about the NMSQT? Did you take enough APs?”

A first grader or kindergartener would be impressed in his or her ability to spell out these acronyms. SAT would turn into “sat” and ACT would turn into “act.” Admittedly, the other acronyms would sound like some sort of jargon.

To a high school student, however, the levels of anxiety, nervousness and feelings of failure that ensue because of these acronyms are ludicrous.

It’s common to hear that aptitude and assessment tests are beneficial; without them, one cannot grow and discover his or her capacity to learn. Although this is true, it is not the first thought by a student. It may not even be within the first few thoughts by a student.

I envision myself studying at twilight hours, with baggy eyes and slumped shoulders. I can taste the strawberry-flavored melatonin that helps me sleep and the taste of caffeine needed to wake me up, all for the sake of studying. I smell the lavender and vanilla mist that is supposedly a sleep inducer as I struggle to fall asleep throughout the week due to studying and worrying. I hear, “Worth. Talent. Intelligence. Potential. Limited opportunity,” as indicators of what those tests really mean.

Lastly, palpable fear overcomes me despite it not being tangible. It wraps itself around me as a constrictor would wrap itself around its prey. This is just one source of pressure.

Another constrictor that nearly suffocates me, other than tests, is comparison. Whether from myself to another student or vice versa, comparison is almost a guaranteed effect of assessments and school in general.

Eventually constrictors, both animal-related and metaphorical, harm someone with excruciating pressure. That pressure hurts both the student and the relationships he or she has with others through its expressions. One of the most notorious expressions of pressure is a panic attack.

A panic attack, at least the ones I’m familiar with, feels like a blanket being wrapped around my upper body. I feel urges to constantly pull at my hair or to rub my arms just to make sure that nothing is on me to make sure that I don’t have a physical item trying to give me an unwanted hug.

As I made plans to study for the SAT and ACT, I became more and more familiar with pressure and its uncomfortable hugs.

All this pressure, I reminded myself, was worth it because it was the only way that I would prove myself and my worth. Who cared how I got to success? So what if there were obstacles along the way? As long as I got there, I’d be happy.

Having said this, on my path to “success” there was pressure, trying to hitchhike every time I was presented with new opportunities.

Pressure begins to thwart the perception of worth. “If I don’t score at least 32 on the ACT, I’m a failure and I can’t do anything else. I am not as worthy as my classmate who scored 34.”

Worth is a strong word, but it is the one best suited to be juxtaposed with intelligence and pressure. Worth becomes determined not by the actions, ideas, values and the personal aspects that compose an individual, but through the success that is thought to only come from perfection.

Pressure, for most individuals regardless of age or level, has a breaking point. A glass can only hold so much until it overflows, and when the glass of a student overflows it has harmful consequences.

Much too often, mental health becomes jeopardized, as do relationships with others because they become sources of displacement. After all, it is most often impossible to keep a glass full without some drops falling.

Displacement, one of Sigmund Freud’s defense mechanisms, involves denying or thwarting reality so that a person can find some semblance of peace within themselves. The negative feelings that were felt because of an event become channeled through placing the same negativity on others, even if others are innocent bystanders.

Kathleen MacLeod-Ryan, a counselor at Xavier College Preparatory, said that in order to avoid displacement on others, a student needs to focus on herself first. “You need to get out of the hurricane, refocus and then jump back in, ready to fight,” said MacLeod-Ryan.

She added, “When there’s too much pressure, just get distracted. Take a walk, listen to music, refocus. You could also exercise because that releases natural endorphins that can combat the icky feelings that pressure places on us.”

In other words, there needs to be balance among all things. School cannot overpower health or family relationships and similarly having fun cannot overpower effort in school. As MacLeod-Ryan phrased it, “Humans can’t be one-dimensional, that’s just unsustainable. We have to be multidimensional in balancing our day. It’s best to think about setting goals that are attainable for each day, not only for a lifetime.”

“So you kind of have to be like a horse with those racing blinders on. You need to focus on the day, one day at a time and without comparing your path to the path of someone else. Just keep telling yourself that ‘Even if I’m not the best, that doesn’t mean that I’m not growing.’”

Pressure can be described as a bittersweet lemon: it pushes us to be stronger and more resilient, but it also takes a serious toll on students who have a passionate desire for perfection. Perfection isn’t human, and it most likely never will be. We are bound to want to be better, but health and self-esteem should be the charioteer that drives effort and strength to surpass pressure.

Decreasing pressure comes from learning that a human is a human, not a number, and it also comes from putting racing blinds on and just focusing on the path ahead, not on the paths of others. After all, did the tortoise win the race by thinking about the rabbit? Did the rabbit win by being overly self-satisfied? 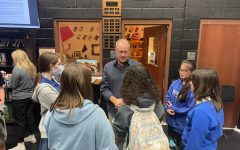 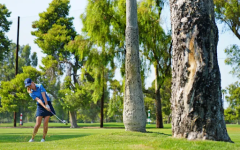 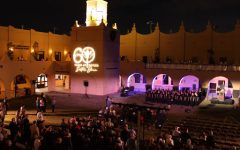 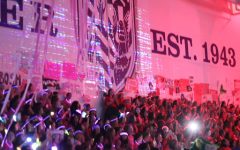 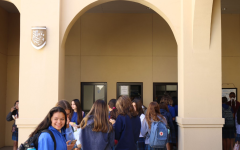 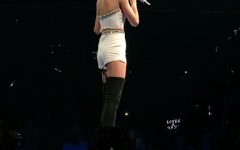 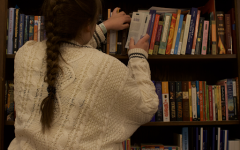 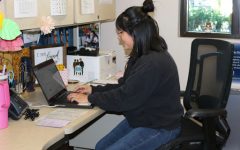 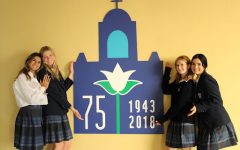