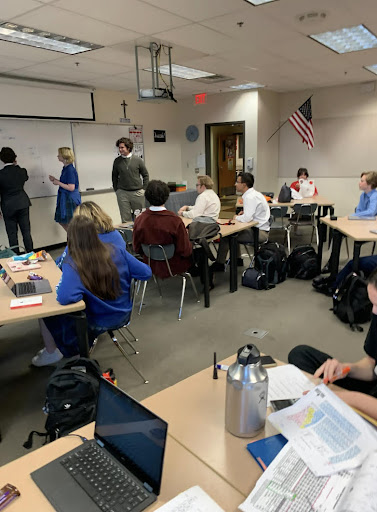 Xavier and Brophy students meet for the first time to create ideas for this year’s production of Bronco Room. Students start writing as many skits as they possibly can.

Sketch comedy shows such as Saturday Night Live have been popular around the world for years. Brophy College Preparatory’s comedy sensation, Bronco Room, has brought lots of laughs and joy to the faculty, staff and students at both Xavier and Brophy.

Bronco Room is a student-written sketch comedy show held in the Blackbox Theatre on Brophy’s campus. Since its beginning in 2012, students from Xavier and Brophy have created more than a hundred hilarious skits and performed them live for family, friends and the surrounding community.

This year’s cast has 22 students, 16 of which are Xavier students.

Gators play major roles in this production. Senior MaryJane Patton, the only Xavier student director, exclaims her excitement for this year’s production saying, “I really look forward to seeing how it’s going to turn out because it is a fantastic show.”

As student director, Patton says scheduling rehearsals is tough because of Brophy’s new block schedule, and that it is hard to direct as a student because the cast “is all her friends” but “they (members) need to get work done.”

The early stages of production in Bronco Room start with collecting ideas and writing scenes for the show. All students participate in writing and choosing skits for the final performance.

Sophomore Delaney Buckel, who performed in last year’s production, says the most challenging part of writing skits is “the actual writing.” This year’s cast came up with about 130 skit ideas, and more than half must be written within the next few weeks.

For new members, especially freshwomen, writing skits can be exciting and nerve-wracking at the same time. Annika Dowdall says she’s “nervous but has fun” when it comes to writing skits.

“There are a lot of rules, but it is pretty chill,” Dowdall added.

The final performance not only includes skits written by cast members, but also two special skits written by the three student directors: MaryJane Patton, Asher Martin and Tommy Liddy. These special scenes appear at the openings of Act I and Act II.

After the writing portion is done, each written script is read and voted upon. “First, we have them all vote on their favorite ones,” says Patton. “Then, each person votes for about seven of them. The best ones make it into the show.” Not all students may get one of their skits into the final performance, but every student will appear as an actor on stage.

Bronco Room provides a great experience for Xavier students to interact with each other. Buckel says everyone “is open to having a friend,” and that the community is very welcoming.

Over the next few months, students will be able to collaborate with each other and create an entertaining show. “It gets more fun every year,” Buckel added.

Come out and enjoy a good laugh at Bronco Room on January 6 and 7, starting at 7 p.m. in the Brophy Blackbox Theater.